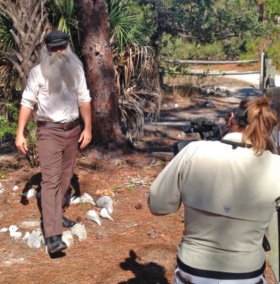 If you have missed out on seeing a very interesting locally oriented documentary called “Mullet and Mangroves: The Pioneer Fishing Families of Cayo Costa,” featuring several island residents behind and in front of the camera, tune in to WGCU-TV (PBS – CH 3) on the dates shown at the right.

Capt. Robert Johnson is featured in the show, and he gave information about Capt. Peter Nelson and his relationship with Johnson’s grandfather, who is buried on Cayo Costa in the well-known graveyard there. Islanders Jean Woods and Betsy Joiner assisted with background information about the fishing families and where they are today.

The portions of the documentary regarding Stanley Darna were filmed at Whidden’s Marina and island resident Effie Joiner’s home, and Effie worked  on the piece as a co-producer. Young Hudson Coleman, a member of a family with generational island ties, is featured in the documentary, as well as Barrier Island Parks Society Executive Director Sharon McKenzie and Park Ranger Robert Long.

Here are all the broadcast times on the main channel on WGCU-TV (PBS- Ch3):