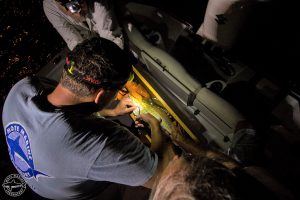 Dr. James Locascio conducts tarpon tagging in Charlotte Harbor off of Punta Gorda with Rick, Gary and Bob on the evening of Tuesday, May 16th, 2017.

A Mote Marine Laboratory scientist worked with Charlotte Harbor anglers to tag their first tarpon of 2017 on May 16 in Charlotte Harbor — an early step toward understanding what these popular sport fish do as they mature.

Dr. James Locascio, a staff scientist at Mote, is studying older juvenile/sub-adult tarpon, about three to five years old, in Charlotte Harbor by fitting them with acoustic tags. These tags are designed to last for ten years, and every 95 seconds they transmit a signal that is detected when the tarpon swims by underwater receivers placed by researchers.

Tarpon of this age are believed to be local to Charlotte Harbor, but it’s not clear where, when and how they join the adult population, and what percentage of these migrate or remain as residents in the harbor. Understanding their life history can support wildlife management practices designed to keep tarpon populations thriving and preserve a Florida tradition of exciting catch-and-release fishing.

“Tarpon usually mature within ten years or less, so when we tag fish that are three to four years or older, this means we can collect data during different life history stages as the tarpon mature into adulthood and change their habitat use patterns,” Locascio said. “We tagged two tarpon estimated to be three to four years old in June 2015, and we have begun to see movement indicating habitat-use patterns associated with maturation. This was used as a pilot study and the results were encouraging, so we invested in 25 more tags and are attempting to deploy these tags between now and September 2017.”

The project is investigating:

How long do tarpon of a given life stage stay in specific habitats, and which biological and environmental factors control this?

The Punta Gorda Isles Fishing Club helped Mote kick off the 2017 tagging effort. Capt. Rick Sarkasian and approximately 20 members on four boats helped with the catch-and-release fishing effort on May 15 and 16, 2017. The fishing was exciting, with multiple tarpon jumps on the line, but these silver kings were elusive at first.

On May 16, Dr. Jim McCartny’s boat landed his first-ever tarpon, a perfect-sized fish for the study at 34-inch fork length and estimated age of four or five years. The acoustic tag was successfully implanted, and the fish was released in fine condition.

“Our first tarpon of the 2017 research effort now has up to ten years’ worth of data to provide, so it was worth the effort and is greatly appreciated,” Locascio said.

Mote is mainly seeking to catch, tag and release tarpon of about 28- to 40-inch fork length. Charlotte Harbor to Sarasota anglers experienced in landing these fish are encouraged to participate in this study.