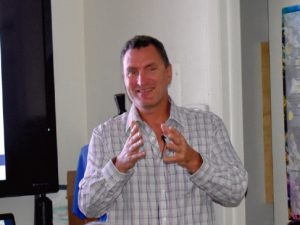 How badly did red tide affect our snook population over the past year? Mote Marine Laboratory scientist Dr. Jim Locascio visited the island on Wednesday, Feb. 13. to discuss the results of a research project he conducted last summer, and answer any questions residents may have about the health of our fish.

Locascio and a team of staff and volunteers sampled snook off the shores of Gasparilla and Little Gasparilla islands from August 28 through September 1. From a boat along the shore, they deployed a 600-foot beach seine net, entered the water and pulled the net toward the shore. The fish were funneled into a bag at the center of the net, allowing scientists to count and measure the fish, attempt to determine their sex, insert PIT (passive integrated transponders similar to microchips) tags and release the fish. PIT tags hold key information about an individual fish and can be scanned to recover data if the fish is recaptured.

“We found 102 snook alive and well during spawning season, which was remarkable,” he said. “Snook can exist in conditions where sometimes red tide cannot.”

If an animal is vulnerable to red tide but can survive in fresh water or salt water, it can find refuge and have a better chance of survival.

Locascio’s presentation, entitled “Response of Snook to the Red Tide Event,” included preliminary results from research conducted during the summer.

“People were experiencing a range of emotions, and in the age of social media, the impact was spread far and wide,” he said. “Most people were upset, but they wanted to do something, they wanted to help.”

There were 489 snook accounted for in seven kilometers in the 2018 study – but that doesn’t take into consideration that some of them could have been reported twice.

“That’s why I wanted to do the study, so we could document the data and establish a baseline to compare our future research.”

The objectives of the study included understanding how snook respond to red tide and to establish a baseline of live and dead fish on spawning grounds that are in close proximity to red tide.

The spawning season for snook is from May through September.

“2018 was a very bad year to be a reproducing snook,” the scientist said.

The fish that spawn on barrier island beaches tend to go back to the same beaches, sometimes months or years after they enter the water.

Locascio added that snook is a prized species, and there have been many efforts to conserve and manage its survival.

“This year we lost a majority of our spawning stock, and all the babies those fish would have made … 2018 is a loss.”

Although the death rates were detrimental, the study did prove that snook were able to re-establish on spawning grounds when the red tide temporarily declined.

“We want to understand what the impact is. This one is bad – I never remember having a (red tide) bloom in June at the same time spawning season is beginning,” Locascio said.

For those wanting to be involved with the research, Mote offers a citizen science information collaboration (CSIC) app. The app is designed for Apple and Android. Once you download it to your phone, volunteers are asked to mark your start- and end- points when walking the beach, and note any red tide symptoms, as well as count the number of dead fish seen on the beach and report them to Mote via the app.

The “Coffee With a Scientist” events are free and open to all. The presentations take place at Mote’s Boca Grande Outreach Office located at 480 East Railroad Ave. in Boca Grande. To sign up for the next one, visit Mote.org.

Newer PostBoots and her beads: How did Bead for Life get started? Part I of a series
Older PostThe 2019 Strawberry Festival: Having fun and helping others