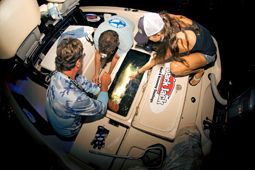 The adrenaline rush and excitement of tarpon fishing arguably make it one of the most sought-after recreational activities among sport-fishing enthusiasts. Because of its strength and fighting ability, the tarpon is Boca Grande’s top game fish.

Despite its popularity, information about its life cycle, habitat use and overall behaviors is relatively unknown. Dr. James Locascio, staff scientist at Mote Marine Laboratory, believes that understanding what habitats tarpon need for survival and how they respond to changes in fishing pressure will help protect the tarpon fisheries for future generations to enjoy.

“Dr. Locascio is launching his second year of tagging tarpon in Charlotte Harbor in order to learn more about their residence in the harbor during different life stages and their movement patterns, including migrations. He needs some local volunteers to assist with the project,” said Mote Marine Public Relations Manager Kaitlyn Fusco. This research project is intended to improve Mote’s understanding of tarpon habitat requirements and range during different life history stages.

The tarpon are tagged with acoustic transmitters that are surgically implanted in the body cavity of the tarpon. The tags transmit a unique signal, which is recorded by receivers positioned around the harbor. Tags transmit their signals every minute and can remain active for up to ten years. “My research background is in passive acoustics and signal processing applied to understanding the timing and location of reproductive activity by sound-producing fishes,” Locascio said. “These methods are used to understand the reproductive ecology of fishes and the acoustic ecology of a diverse range of habitats, and how the use of these habitats varies naturally and in response to human-induced changes on broad time scales.” The goal is to create more “citizen scientists” and expand the fish-tagging program throughout the estuaries and out into Charlotte Harbor.

Dr. Locascio has a few volunteers right now, but he’s hoping to find more in Boca Grande to extend the scope of this research project. “Specifically, we are looking for people with vessels who are also experienced anglers and will take us out to areas where they know the juvenile tarpon are, and also where the adults may be spawning,” he said. The 5- and 10-year tags track and transmit the migratory patterns on the fish so that researchers can see which ones migrate back to Boca Grande Pass and which ones will join another group and leave the area. The tags transmit the location of the fish every minute and can last up to ten years, depending on how they are powered. Locascio said having anglers as volunteers greatly reduces the risk of harm to a fish after it is tagged and released.

“We certainly don’t want to release a newly tagged smaller tarpon into Boca Grande Pass, because it would be vulnerable and disoriented and could become easy prey for larger fish. Then there is no benefit from the tagging of that fish,” he said. Looking ahead, Locascio said he would like to further develop the study to learn more about the relationships between tarpon and sharks in the gulf. “I’d like to see this become a multi-year, multi-faceted project. There’s a lot of effort required to get the project going, and we’re doing well so far. It would be great to see it move to a larger scale. My hope is to get 25 fish tagged per year,” he said. Researchers can help with fuel costs for the trips.