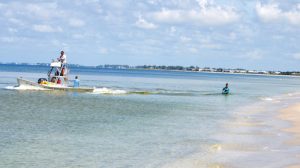 BY SUE ERWIN – Mote marine scientists were at 7th Street beach in Boca Grande on Wednesday morning to lead an assessment project on the local snook spawning stock, a vital effort needed to determine impacts to this important fishery and to develop more strategic stock enhancement actions to ensure recovery of this population as quickly as possible.

During the field sampling, Mote scientists and trained volunteers assessed the status of living stock along beaches of Gasparilla and Little Gasparilla islands.

From a boat along the shore, scientists deployed a 600-foot beach seine net, entered the water and pulled the net toward the shore. The fish were funneled into a bag at the center of the net, allowing scientists to count and measure the fish, attempt to determine their sex, insert PIT (passive integrated transponders similar to microchips) tags and release the fish. PIT tags hold key information about an individual fish and can be scanned to recover data if the fish is recaptured. 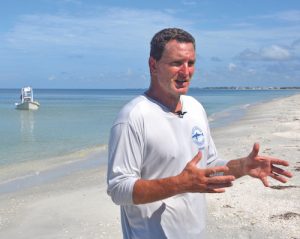 “That was a freeze and affected all sizes and ages,” Locascio said. “This event occurred on spawning ground and affected the reproductive cycle, so that impacts the future of the fishery.”

Right now it’s very important to fish responsibly by not fighting the fish too hard or long, using circle hooks, and holding and releasing the fish correctly, the scientist added.

“All the guides are very good about that, and they teach their clients the correct methods to fish,” he said. “I’m very proud of the local guide community; they really care about our resources.”

At the time of the interview on Wednesday morning, 27 snook were caught, tagged and released. Scientists continued in a northerly direction on the beach to drop and pull the net several more times.

“We’re really trying to get estimates of their condition,” Locascio said. “We’re getting near the tail end of spawning season, and there’s no question that hundreds of fish that would have been out here have been killed. But we are seeing vitality.”

Mote staff member Ashley Hill and volunteers Madison Sims and Christina Caldwell assisted with the project and helped pull the net to shore.

Locascio hopes to get more volunteers in Boca Grande to help with more research projects in the future.

“If we do this testing next year, and repeat it every year, each time the story will get longer and the context will be more well understood,” Locascio said.

This project is supported by emergency funds issued by the State of Florida earlier this month.

Florida fisheries have been hit hard by the ongoing Florida red tide bloom, including adult snook present on their spawning grounds during summer months along Charlotte and Lee County beaches.

The data collected this year will help scientists understand the recovery trajectory of the stock in future years.

Snook are an important part of Florida’s recreational fishery, which as a whole contributes $8 billion to the state’s economy.