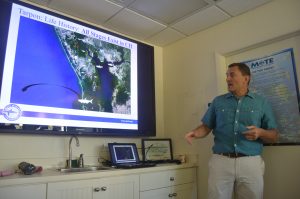 Tarpon is iconic on our island, and it’s a gem under study for Mote Marine Laboratory scientist Dr. Jim Locascio.

He presented a program sharing his latest research on acoustic tagging and tracking of tarpon in Charlotte Harbor to a gathering of island residents on Wednesday, April 12.

The scientist has been working with a team of volunteers and fishing captains in southwest Florida on an acoustic tracking program for the past two years.

A small incision is made into the belly of the fish, and then it is released. The tags track the fish every 90 seconds for up to ten years.

“We don’t do it during season – that would be foolish, because the sharks would get them,” Locascio said.

The tags do not exceed two percent of the body weight of the fish. Local acoustic receiver locations exist in the Peace River, Charlotte Harbor, Punta Gorda and Cape Coral. “I concentrated my receivers in Boca Grande Pass as the nucleus, because I wanted to concentrate on the adult tarpon,” Locascio said.

Eight tarpon were tagged here in 2014 by local fishing captain Phil O’Bannon. Four more were tagged by a team in 2015.

Most of the fish that were tagged in Boca Grande in January followed the same movement patterns. The fish remained in the Peace River, Cape Coral and the Caloosahatchee River throughout the summer. They were adults and weighed more than 120 pounds.

The reason the fish remained in the area is because the rivers are flowing with rain during that time, so they take advantage of the abundant food, and they take in gulps of air.

River water is lighter and saltwater is heavier. Locascio said tarpon are soft fish and are unable to hold tags for long periods of time. Some only have them attached for one or two months, but a few have held them for nearly a year. One fish was tracked for two years, and it never left the Charlotte Harbor. Two internal tags were placed in younger tarpon in 2015. They were estimated to be between three and four years old.

To tag them internally, the fish are caught and put in a live well. Then scientists make a small incision and suture it back up.

“It takes a little bit of practice and a bit of confidence,” Locascio said. “We were very fortunate to have a few doctors as volunteers, so that helped greatly in the process.”

Satellite tags have light sensors and track the movements of a fish as it travels in local estuaries throughout the day. Receivers can be deployed for a year. Acoustic tags work best underwater. That’s where sonar was discovered. Funding for the project is difficult to obtain.

“It’s not a federally managed fish, because it isn’t a food fish – we don’t eat them – so they are not federally funded,” Locascio said. After a brief presentation about his work, Locascio was available for casual conversation and a question-and- answer session.

The event was free and open to the public.

Mote hosts the monthly presentations during the winter months at the Boca Grande site located at 480 East Railroad Ave., Railroad Plaza on the island. Tag sponsors are needed. Sponsors can name the fish and will receive an update twice yearly on the fish’s locations and migrations.

For more information or to sponsor a tarpon tag, visit mote.org.