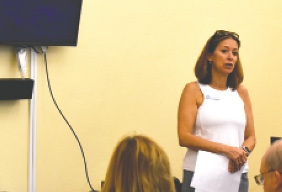 Andria Piekarz, director of development at Mote, introduced Lovewell to the crowd.

“Gretchen has been active in the stranding network since 1999, when she was a student at University of North Carolina Wilmington,” Piekarz said. “The stranding program responds 24 hours a day, seven days a week to calls about sick or injured marine mammals and sea turtles in Sarasota and Manatee counties, while assisting in responses outside that range as well. Gretchen has responded to more than 40 different species of marine mammals and sea turtles.”

“We couldn’t respond to this many calls without the help of law enforcement and volunteers, as well as FWC and the Florida aquarium – they are all very key partners in what we do,” Lovewell said. “It takes a village to get this much accomplished. Every rescue is different – in 2018 we excavated a whale. In August of 2018, the governor declared a state of emergency because the marine animal mortality rate was so high – we received almost 1,500 calls that year.”

Lovewell said that sea turtles represent the bulk of what the organization deals with during a red tide bloom. The red tide toxin acts like a neurotoxin and affects their ability to surface and swim well, and they appear very uncoordinated.

“We lost 312 sea turtles in 2018, and the average is about 100 per bloom,” Lovewell said. They were mostly loggerhead, and there were equal amounts of males and females.”

But there is good news, she added.

“If you remove the turtles from the toxic environment and give them good food and fresh water, they can recover very well and be placed back in their natural environment fairly quickly, and fortunately, they seem to stay away from the bloom area.”

The 2019 nesting season was outstanding. On Gasparilla Island alone, there were a total of 624 nests, with 602 being loggerhead (Caretta caretta) sea turtles. Other associations in Sarasota and Manatee counties also reported strong nesting seasons.

To follow a tagged turtle, or to check on the update of a rescued sick or injured turtle, visit mote.org.

Mote Marine staff scientists work very closely with the Florida Fish and Wildlife Conservation Commission to determine the safest place to release the animals in an area where the blooms aren’t as intense.

“Keeping them in rehab just to wait for the bloom to subside wouldn’t be fair to the other marine animals that are sick and need a place to recover,” Lovewell said.

The organization responded to 33 cetacean (dolphins, whales and porpoises) strandings in 2018 – that number being higher than usual.

In addition to her stranding work, Lovewell has participated in aerial and vessel surveys for marine mammals. She’s a level 3 first responder for large whale disentanglement and has participated in multiple dolphin health assessments and rescues. This work has led to several collaborations on peer-reviewed scientific papers, presentations and reports.

If you see a stranded or dead dolphin, whale or sea turtle, call Mote’s stranding investigations program, a 24-hour response service, at (941) 988-0212.