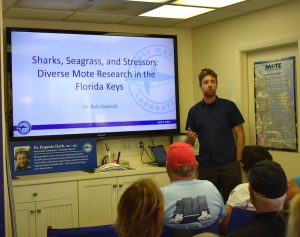 Mote Marine scientist Dr. Robert Nowicki gave a brief presentation about his work entitled, “Sharks, Seagrass and Stressors” on Wednesday, March 13 in the Mote Boca Grande outreach office. He concentrated on three major issues during the interactive talk: Can seagrasses help corals? Can we reduce shark bycatch? Will species quit their jobs under ocean acidification?

Nowicki said community ecologists have to be very clever in how they tackle research issues.

“There are a lot of different strategies that ecologists use. Some of them involve really advanced statistics and mathematics. My strategy is to use technology to try to figure out where we can really focus our effort to get the maximum impact.”

Nowicki has a background in animal behavior, and he uses camera technology in his work to track the habits of sea creatures.

“Cameras are very helpful to record behaviors, because the animals are not affected or stressed by human interference,” Nowicki said. “Technology has changed so much in the past 10 years … it’s fairly cheap, it’s very helpful, and it’s shareable.”

In some of his research, he found that some sharks, during their course of mating, actually bite the fins of their mate and use that to help orient themselves before copulating.

“That’s mating behavior to a shark biologist, but if you are a sea urchin biologist and you see it happen around a reef, you might classify that as aggressive, antagonistic behavior,” Nowicki said. “And if you have the data recorded, you can take them to a specialist and get a different opinion.”

He uses camera technology research to try to figure out specifically which interactions between species are dominant and which ones are important enough to keep studying.

“The reefs there are slated for development over the next 10 years,” he said. “That means more people, more nutrients, more fishing, more people on the reef and more stress for the reef itself.”

Nowicki said one of the more important biological stresses for reefs is overgrowth by algae.

“Algae can outcompete corals. They can kill adult corals and keep baby corals from settling, so if you have an already stressed ecosystem and you lose the corals, the algae can take over and that can be really hard to reverse.”

Herbivores like fishes and urchins can be very important in keeping that from happening if a reef gets stressed.

His team gathered every species of algae they could find, planted them in one area and placed a camera near the plants.

“In videos like that, we were able to find that out of all the hundreds of species that were there, only one of them really had a significant effect on this algae relationship.”

That information can be used to make a recommendation to protect and conserve that species now before it starts to decline.

Nowicki has also done research in Australia with green turtles. He would place a camera on top of a turtle’s shell to track its movement and habits. After two days, the camera would peel off and float to the surface.

“We were able to observe this animal without divers being there and affecting its behavior,” he said.

He is currently working on three projects in the Florida Keys. He’s studying the relationship between seagrasses and corals – specifically if corals can survive disease events. The second project is using underwater video cameras to reduce nurse shark bycatch.

In July 2018, Mote Marine Laboratory scientists and partners from the Dutch Elasmobranch Society began investigating how to keep nurse sharks from getting stuck in spiny lobster traps, to benefit both species and the lobster fishery. The Dutch Caribbean is a shark sanctuary, but the spiny lobster fishery of the Saba bank catches hundreds of nurse sharks every year inadvertently. This nurse shark bycatch can not only increase trap-handling time and reduce fleet time efficiency for the fishermen, but nurse sharks can also damage orconsume lobster, greatly reducing their value on the market.

“Our original thoughts were that sharks enter traps and essentially treat them as lobster vending machines, but our work suggests that sharks first try to get out, and sometime after they give up, the lobsters start to look tasty,” Nowicki said. “This has caused us to pivot objectives and explore how to design a trap that excels not at keeping sharks out, but at letting them escape quickly. Preliminary results on this are looking very promising.”

The third project will focus on species behavior under ocean acidification.

“Ocean acidification” is a term used to describe significant changes to the chemistry of the ocean. It occurs when carbon dioxide gas is absorbed by the ocean and reacts with seawater to produce acid.

“We’ll be studying if the important feeding relationships between plants and herbivores start to change when we acidify our oceans.”

Seagrasses provide habitat for fish, they help clarify the water, and they help stabilize sediment. “One acre of seagrass habitat stores more carbon than one acre of Amazon rainforest,” Nowicki said.

“When we plant seagrasses next to a reef, the rates of coral disease are cut down significantly.”

The next “Coffee with a Scientist” event is planned for 9 a.m. on Wednesday, April 10. The events are free to attend, but an RSVP via mote.org is requested.