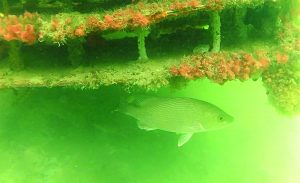 STAFF REPORT- The “living dock” project continues in Boca Grande, and Mote Marine Laboratory has been working over the past few months to make sure this project is kept alive and thriving in Boca Grande canals.

Mote has installed several living dock structures on docks, and they are studying how well these “artificial reefs” attract filter feeders that might help filter red tide toxins. “Of course, we don’t have red tide right now, but we’re getting baseline data that’s also important for the project,” said Stephannie Kettle, public relations manager for Mote Marine Laboratory & Aquarium. “The project was funded by support from the Boca Grande community.”

The living docks are man-made structures that are deployed off docks in canalways. These structures invite colonization of various filter-feeding invertebrates. A filter-feeding organism is one that obtains its food by straining plankton from the water column using either their gills, hair-like filaments called cilia, or other bodily adaptations.

Many of these filter-feeders are also considered to be sessile organisms, meaning they permanently attach themselves to submerged substrates. Colonies of these filter feeders may help to filter sediments, and potentially other things such as Karenia brevis (a.k.a. Florida red tide algae) and/or the toxins produced by K. brevis (brevetoxins), out of bodies of water. By deploying artificial reef structures (i.e. Living Docks) off of boat docks, more substratum and habitat could be provided for invertebrates and other organisms to colonize, potentially helping to lessen the impacts of Florida red tide blooms.

The goal of the Living Docks project is to determine how efficiently these colonizing organisms filter the water in canalways during a Florida red tide bloom when concentrations of K. brevis are higher than normal. Objectives include identifying which colonizing species most efficiently filter out K. brevis cells, brevetoxins, or both. Identifying the most efficient filterers of Florida red tide, and promoting selective colonization of those organisms, could potentially aid in reducing the effects of Florida red tide (e.g. respiratory irritation and fish kills) experienced by residents living near the canalways.

The Living Dock prototypes are 3’ x 2’ x 2’ and will be installed under the participants’ boat docks, a couple of feet below the water surface, using 3/8” polypropylene rope and a floating collar that secures the unit to the dock pilings. There are currently four living docks secured to Bay Dock behind Mote Marine Laboratory and Aquarium in Sarasota, Florida, and they have not posed any navigational issues thus far.

During the course of the project the Living Docks will be assessed on a bi-weekly basis during a Florida red tide bloom, and on a monthly basis when there is not a bloom. Assessments typically take 20-25 minutes per structure and include photographing the living dock structures, assessing colonization, species identification, taking water samples, uploading water samples using HABscope, and testing water quality parameters using handheld YSI. All equipment and supplies will be provided. Project updates will be provided via email to all participants and collaborators following each assessment.

At the end of the project, participants may keep the Living Dock structures if they’d like. If a participant does not want to keep the structures at their dock, structures will be removed and taken to Mote Marine Laboratory in Sarasota, Florida, to be reused in future projects. In the event of a tropical storm, docks will be left in place in order to test how well they stand up to these types of storm events as this will be good information to have moving forward.

If there are any questions or concerns at any time during the project, please contact Aspen Cook at acook@mote.org, Sarah Caywood at scaywood@mote.org, or Dr. Tracy Fanara at tfanara@mote.org. 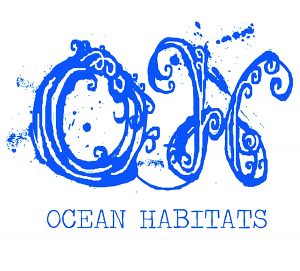