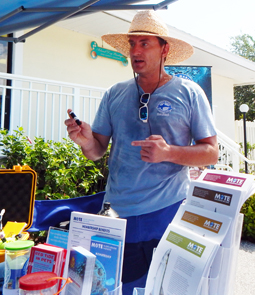 Dozens of people stopped by the Mote Marine Laboratory’s Boca Grande office on Saturday, June 11 for the first-of-its-kind World Oceans Day celebration. Numerous educational exhibits were set up in the parking lot on Railroad Avenue.

Dr. Jim Lacascio, staff scientist at Mote Marine, had plenty of educational information to share with guests at the event. He passed along information about the shark-tagging program he’s involved with and the research he has been doing recently with snook and some other types of fish. Fielding questions from guests at the event, Lacascio discussed how the scientists tag the fish and trace their patterns in the water.

“Once the fish are tagged, we listen for their movement in the harbor, and when the tag ‘pings’ to a remote satellite, it means the fish are swimming near underwater receivers,” he said. Mote volunteer Jennifer Lottmann spent three hours at the event pointing out some of the different marine species in the 100-gallon mobile touch tank. It was the first time many of the visitors had the opportunity to touch a starfish or a sea urchin.

“It’s very sharp and pointy,” said six-year-old Timmy Frederick, who was visiting the island from Orlando. Michigan resident and island regular visitor Jan Barrett was fascinated with the fossil exhibit at the event. “I am learning so much today. It’s so refreshing to see how passionate these people from Mote are about their jobs and our environment,” she said.

Several nonprofit vendors were at the event, including members from the Boca Grande Sea Turtle Association, representatives from the Lemon Bay High School S.T.E.M program and several volunteers from Mote. Mote Marine spokesperson Ashley Hill said this is the first year they have held a World Oceans Day event in Boca Grande, and she hopes it will become an annual event.

“We are impressed with the turnout so far. It’s great to see people interested in learning more about our programs and the results of the research that we do for local marine life,” Hill said. World Oceans Day is nationally celebrated every year on June 8. It provides an opportunity to honor, appreciate and conserve the Earth’s oceans.

For more information on how to get involved, go to mote.org.