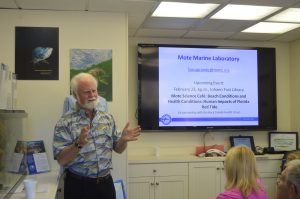 Passion. Partnership. Philanthropy. Those are the three words Dr. Michael Crosby, president and CEO of Mote Marine Laboratory, said determine the success of the organization when he explained the mission of the lab to a group of island residents on Wednesday, February 8 at the island office.

Crosby gave credit to “the Shark Lady of Boca Grande,” Eugenie Clark, for her passion and energy for learning more about local marine life, stating that a similar passion exists in each and every researcher and scientist at Mote today.

He went on to discuss projects that the marine scientists have been working on recently, including studies of red tide and Dr. Jim Locascio’s work with juvenile tarpon and sound acoustics in Charlotte Harbor.

“Partnerships are crucial to our success, so it’s very important that we continue to maintain relationships with universities with leaders who are passionate about our work,” he said.

Crosby said that over the years, climate change has affected the whole ecosystem and has made it become an algal and sponge habitat instead of a coral reef habitat.

“Our current focus is on looking at the genetic strains of the species of coral that are more resistant and resilient to changes in pH and temperature, and concentrate on a new technique we’ve developed, called ‘microfragmentation,’ so we can in fact restore our coral reefs, not only in Florida, but all around the world,” he said.

A question was asked about Southeast Asia flooding the market with Tilapia, because there are no regulations on what is happening to fish populations in that area.

“Aquaculture in the past has been a pretty dirty business,” he said. “I’ve been involved with it since the 1980s, when it was not necessarily good for the environment. So rightly, corrections were put into place to stop that negative impact.

“But since our oceans are no longer able to produce enough fish naturally to meet the demands of people, aquaculture when managed correctly is the answer, and it takes the pressure off the wild populations.”

Crosby added that “while other countries have turned the opportunity into a lucrative business, we have been focusing on research to ensure that we can sustainably produce marine and fresh water species. I think there is growing public acceptance and a growing interest on the part of our elected officials to launch this initiative.”

He closed the discussion by saying he hopes the Boca Grande community understands how important it is to Mote.

“You are part of our family. This is where we were born, and you are part of our history in many different ways. I think we have a vision for the future that is worthy of your support, and we’d very much like to expand our operations here.”

Mote Marine Laboratory and Aquarium is an independent research institution that has been a leader in marine research for more than 60 years. Dr. Crosby had previously served for three years as Mote’s senior vice president for research. He came to that position following appointments as associate vice president for research and economic development at George Mason University and vice chancellor for research at the University of Hawaii. Prior to those appointments, he served in a federal senior executive service position as executive director of the National Science Foundation. He came to the Board from the National Oceanic and Atmospheric Administration, where he served as senior advisor for international science policy.

Mote is planning an event on Thursday, Feb. 23 at 6 p.m. at Johann Fust Community Library. The topic of discussion will be “Beach Condition and Health Condition: Human Impacts of Florida Red Tide.”