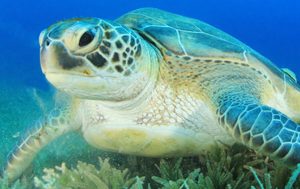 “This is exciting news,” said Board member Mel Csank. “Last season we had only two Green turtle nests, so we are trending ahead significantly this year.”

The north beach renourishment project is complete and the sand in that area was tilled to soften it, making it easier for turtles to nest. There have been 20 nest relocations so far.

So far this season, 429 nests (12 green and the rest loggerhead) have been documented by patrol volunteers, and 554 false crawls have been reported. A false crawl is when a turtle makes its way onto the beach, but doesn’t produce a nest. Patrol members said they expected a high number of false crawls in June due to the beach renourishment project.

There were 20 relocated nests due to the renourishment project.

“Two of the relocated nests have successfully hatched, one with 100 percent success, the other with 98 percent success,” said BGSTA Board member Mel Csank. “The other thing is that we’ve had three new green nests in less than one week – that brings the total up to 15, which is 13 more than last year and there’s still time for more. In 2017 we had a total of 18 green nests, but in 2018 we only had two.”

The green sea turtle (Chelonia mydas) faces many threats both on land and in the water and is protected under the Endangered Species Act, according to the National Oceanic and Atmospheric Administration.Their distinctive crawl and nest that looks like a bomb crater is far more rare on the island than the Loggerhead (Caretta caretta). Typically we have fewer than 10 green turtle nests each season.

The hatchlings are about the size of a ping-pong ball, and if they survive land predators like bobcats and coyotes, they feed on small organisms living in sea grasses called sargassum, where they spend their early developmental years.

Patrol members collect data daily and the information is then sent to Florida Fish and Wildlife Conservation Commission. These data help track the health and activities of the species.

Newer PostThe truth about ‘flesh-eating’ bacteria in our waters … If you don’t feel safe going to the beach, read this
Older PostWatch your belongings at the beach, there are thieves afoot