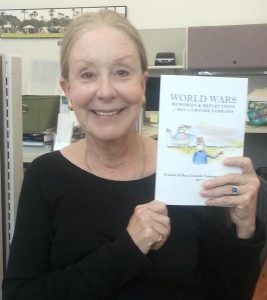 When island resident Barbara Edgerton was asked to manage a collection of World War stories from Boca Grande families, she happily agreed, even though that meant dedicating the next year of her life to complete the project. After it was announced that Friends of the Boca Grande Community Center were going to publish a book filled with war memories and reflections of Boca Grande families, the stories continued to pour in.

The paperback is titled “World Wars: Memories and Reflections of Boca Grande Families.”

“It was such a rewarding experience when people started sharing their stories” Edgerton said. “And we didn’t turn anyone away. What right do we have to deny people the opportunity to tell their family stories?”

The book is very well rounded and includes a military love story, what life was like in Germany during the war years, a story about a female aviator from Connecticut and a soldier who had some very close calls.

“Some of the stories are funny and delightful, and others are so poignant they just tore at my heart,” Edgerton said.

The book is illustrated by Peter Diebold with sketches drawn alongside several of the stories that didn’t have photos submitted with them.

Edgerton considers herself lucky that she had the opportunity to speak with all of the people who shared their stories. She spent hours talking on the phone with a couple of people last summer.

“I am more than proud of this book. It was an honor to connect with so many interesting people on the island,” she said.

The group project was completed by Edgerton, Sandy Jacobs, Debbie Frank and Jessica Smith. Edgerton extends her sincere thanks to them for all the hard work they put into the book.

“This book really is quite a unique compilation of stories and remembrances submitted by Boca Grande community members,” said Debbie Frank, program director at the Boca Grande Community Center.

This is the second book Edgerton helped put together with the Friends of the Boca Grande.

The first book, “Civil War Memories,” was published in 2013. A few copies of that book are still available.

The new book, “World Wars: Memories and Reflections of Boca Grande Families,” is available for purchase now for $20. Copies are on hand at the Friends of the Boca Grande Community Center office.

Newer PostHere is your island Easter in a pastel nutshell
Older PostArtist for World’s Richest chosen; sign up while there’s still time