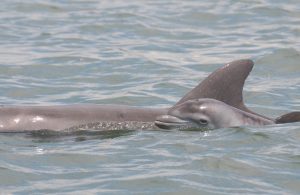 The sun is out, the weather is warm, and it is the perfect time of year for boating in Southwest Florida’s coastal waters. Mote Marine Laboratory reminds boaters and beachgoers to keep local waters and shores safe for marine animals.

Please practice Coast Guard-approved safe boating guidelines, and use vigilance to avoid striking sea turtles, manatees and dolphins. Below are wildlife-friendly tips for Memorial Day, from beach to boat.

Protect sea turtles on the beach The official season for sea turtle nesting on the Gulf Coast of Florida began May 1 and ends Oct. 31.

Mote scientists monitor sea turtle nesting along 35 miles of beaches from Longboat Key through Venice. Mote, a nonprofit research and education institution, the Sarasota Police Department, and Suncoast Charities for Children would like to remind residents and visitors of the entire Sarasota County Sea Turtle Protection Ordinance, Chapter 54, Article XXIII of the Sarasota County Code of Ordinances, which protects endangered sea turtles on all local beaches throughout nesting season, May 1 – October 31.

The Sarasota County Sea Turtle Protection Ordinance requires that any “temporary structures, including but not limited to beach chairs, umbrellas and cabanas which have the potential for entrapment of marine turtles and which may interfere with the use of the natural beach environment for nesting habitat, be removed from the beach nightly, from sunset to sunrise.”

Beach furniture and other beach equipment, toys or trash left on the beach overnight during sea turtle nesting season can pose a serious entanglement hazard and obstacle for sea turtles and their hatchlings. To comply with the City and County ordinances, beachgoers should wait until at least sunrise to set up furniture or equipment. This will allow any new turtle crawls and nests to be documented by Mote scientists.

If you see turtle tracks not yet documented by Mote (documented tracks are crossed out with an “X”), please avoid placing furniture on them if possible, and call Mote’s Turtle Patrol at (941) 388-4331 to report their location. In addition, please do not approach nesting turtles or hatchlings, do not make noise around turtles and their nests, and do not use fireworks, flashlights or fishing lamps on the beach. Artificial lights can disorient nesting turtles and their hatchlings, which emerge at night and use dim natural light to find the sea.

Beachgoers should stay away from sea turtle nests marked with yellow stakes and tape, and seabird nesting zones that are bounded by ropes.

Dogs are not allowed on Sarasota County beaches other than Brohard Paw Park in Venice, where they must be leashed or under voice control, according to County ordinances.

All sea turtle species are threatened or endangered, and state and federal laws prohibit the taking, possession, disturbance, mutilation, destruction, molestation and harassment of marine turtles, nests or eggs.

Florida state law states that any person who violates this law commits a third-degree felony. Watch out for dolphins, manatees and turtles at sea Mote urges boaters to be on the lookout for manatees, dolphins and sea turtles this Memorial Day weekend.

The leading human-caused threat to Florida manatees is watercraft collisions, which according to the Florida Fish and Wildlife Conservation Commission has caused 31 manatee deaths so far this year in Florida. Propellers and boat hulls inflict serious or mortal wounds, and most manatees have a pattern of scars on their backs or tails after surviving collisions with boats.

Manatees are currently on the move in the Sarasota Bay for foraging and mating, and the bay provides a home for mother manatees and their newborn calves. During the summer months, people might observe mating herds, in which several manatees gathered as males vie to mate with a female. It is best to observe herds from a distance without disrupting the animals’ natural mating behavior, as adult manatees typically weigh upwards of 1,000 pounds and people can be seriously injured.

Dolphins give birth during late spring and summer. Dolphins do not or cannot, always get out of the way of approaching boats, and fatal collisions and serious injuries to dolphins occur in Sarasota Bay. The Bay’s resident dolphins frequent shallow waters, where they may be unable to dive below an approaching boat. Naïve newborn dolphins lack the skills and experience to avoid boats, and they have to surface more frequently to breathe than do older dolphins. Two new babies have been born to Sarasota Bay resident dolphins so far in 2017.

Sea turtles are swimming just offshore to mate, and females inhabit nearshore waters between nesting events before they come ashore to nest. So far this year, Mote’s animal rescuers have responded to or received many distressed or deceased sea turtles, including several affected by human activity.

If you observe a manatee mating herd, watch the manatees from at least 100 feet away. Coming any closer might disrupt the animals’ natural mating behavior or put people in harm’s way.

Follow 10 simple dolphin-friendly viewing tips on how to enjoy your day on the water while helping to protect dolphins. Click here for a PDF. These tips were made with dolphins in mind, but they’re also great guidelines for the best ways to view all large marine animals.

Newer PostProfile: Travis Joiner
Older PostWe’re a pretty preppy place, I guess … does that mean we have to wear shoes?