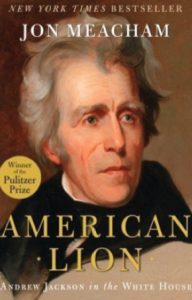 BY MARY COOK – Last Saturday, Jan. 13 at 4:30 p.m., an hour that merges into cocktail time for some, biographer/historian Jon Meacham kept a full auditorium mesmerized at the Community Center. Author of “American Lion: The Complex Legacy of Andrew Jackson,” Meacham spoke about President Donald Trump’s self-proclaimed identification with Jackson, a concept that again makes his 2008 Pulitzer Prize winning the focus of media attention.

Meacham, who has been at home in the spotlight many of his 49 years, is a TV regular on Meet the Press, PBS, CNN, Fox News, Morning Joe, Real Time with Bill Maher and on the former Jon Stewart Daily Show, is hardly afraid to feature the humor in reference to public figures. Nor does he shy from candor.

Author also of “Destiny and Power: The American Odyssey of George Herbert Walker Bush” (2015) Meacham traced the succession of presidents in the Oval Office beginning with George H. W. Bush: “The country has gone from 41, who led according to his ideals,” to Clinton “who was fun to talk with, actually, that is, listen to,” to W. “who led by his gut, was an instinctive president,” to “the law professor,” Obama, “who thinks about things and thinks about things” to Trump “who is a historical Sudoku!”

The critics who cry ‘’the sky is falling” are not right in terms of Trump presidency policies, according to Meacham. He assures that “the rule of law is working and so will the tax bill – whenever there is a tax bill, there are always arguments … but then when I have to explain to a 6-year-old what ‘shithole’ means,” says Meacham, “that is when the sky is falling!”

Asked about another Mitt Romney run, Meacham offered, “I like Romney. I think he’ll win.” Commenting on the Robert S. Mueller investigation, he said, “A Washington Post reporter friend of mine says the Mueller investigation is the tightest thing he’s seen in 30 years of reporting in Washington. Not a single leak.” He noted an important political asset Romney and Mueller share: “great hair.”

Asked to comment on President Trump’s sense of being a present-day Andrew Jackson, he agreed the two have “surface similarities” as populist, anti-establishment presidents with volatile personalities. He pointed out; however, that Trump is an impetuous man who entered the White House with a background in commercial development and reality TV. Jackson, on the other hand “a player of chess, a game that rewards careful thought and foresight,” took office as a military hero and politician. Trump followed his father into a successful business, while an orphaned Jackson grew to be a general, a lawyer and a statesman.

In addition to the Bush and Jackson biographies, Meacham is author of Franklin and Winston: An Intimate Portrait of an Epic Friendship; Thomas Jefferson: The Art of Power; American Gospel: God, the Founding Fathers, as well as Making of a Nation, Thomas Jefferson: President and Philosopher.

An audience member asked how Meacham chose the title American Lion for a book about Andrew Jackson. He explained, “Lions are the best allies you can have. And they make the worst enemies!”

Jon Meacham’s talk was part of the American Presidents and Politics lecture series with the Friends of Boca Grande Community Center. For more information contact the Friends office at (941) 964-0827.