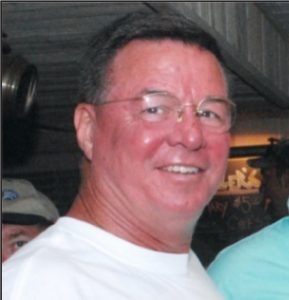 On Tuesday, Sept. 18, 2018 island residents were shocked to hear of the passing of Capt. Mark Futch, a man taken far too early who will be missed very much by many.

While his brother David will be writing a full obituary that will run next week, we want to acknowledge how much he meant to us here at the Beacon.

Mark was a true island son, born on Sept. 26, 1954, the fourth generation of the Futch family on the island. He was bigger than life, and he always had a story to tell. He was a tarpon captain – one of the most famous in the Pass – who had won many, many tournaments. He was an airplane and seaplane pilot for many years as well. But David will tell you more about that next week.

He was a historian, he was a tall tale teller. In fact, his stories were so prolific that anyone who knew him knew what the word “Futchism” meant, but as much exaggeration his words carried, so did they carry the truth. He was never afraid to draw attention to his own accomplishments, but he was also quick to point out the accomplishments of others. He was generous, he was kind to most, and he possessed a trait that is hard to find in this day and age: He listened, and he remembered. If you mentioned to him that your grandmother was sick, he would see you three months later and ask you how she was.

I considered him to be one of the oldest friends I had on the island, as he was one of the first people I met when I started working at the Gasparilla Gazette in 2003. From the first time I met him, every time my phone would ring and I would look down to see him calling, I knew another adventure awaited me. Every time I saw him, his smile always made me smile.

A friend of his, Tim Wright from Placida, emailed me and asked if I would put his thoughts about Mark in the paper. I will close this story with those words, and with a reminder that a more complete obituary for Mark will run next week.

Man of deeds, with stories

Encyclopedic of the past,

All of which he could back up.

Florida and the Caribbean

From the highest expert

Rung of the ladder.

Fierce advocate of the entire ethos

Of his coast and

The rich human legacy of

Can’t forget riding beside him

In his straight floater

Out of the Boca Grande Bayou

Out over The Pass,

Dipping low over the

Aerating in the surf zone,

The light from the lowering sun

On the wave crests. Man.

“There’s little left that we can say

by way of comfort, you and I.

Would it were something brave and gay to speak with glasses lifted high.

How strange it is to find today that tongue and glass and heart and eye run dry in this attempt to say one blunt and simple word: Goodbye.”