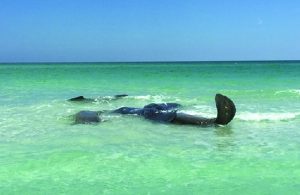 ■ BY SUE ERWIN – Boca Grande resident Tom Shaffer was taking his regular morning stroll on the beach around 9 a.m. on Saturday, May 14 when he noticed a peculiar group of manatees frolicking in very shallow water just a few feet from the beach shore.

His four-year-old Golden Retriever, Maggie, paused just north of 35th Street to take a closer look at the group of playful animals. He said no one else was on the beach at the time that morning.

“There were about nine of them. They were literally four feet from the beach. Maggie was just enthralled with them. She didn’t bark, she wasn’t afraid, and she definitely didn’t want to leave the water,” Shaffer said. Shaffer took three or four videos and several still photos with his phone when he was walking near 40th Street. Shaffer and his wife, Sue, saw another pod on Sunday morning farther south on 20th Street.

While some people may become concerned that the creatures were swimming in such shallow water and fear that they may get stuck in the sand near the shore, pay no mind to these creatures during this time of the year, because they are naturally trying to reproduce.

Shaffer said he went home and researched the manatee mating process a bit and found that when a female manatee goes into heat, the males will follow her around for days.

Female manatees reach sexual maturity in 3 to 5 years and males reach it at 5 to 7 years. Some may live more than 65 years in captivity. The gestation period is approximately 13 months, and usually one calf is born. The calf may stay with its mother (cow) for up to two years. Male manatees (bulls) are not part of the family unit. Bulls will leave a cow alone after her breeding period is over. Of the wild manatees that reach adulthood, only about half are expected to survive into their early 20s. The Florida manatee, designated the state marine mammal in 1975, is among the state’s most popular native animals. A listed species under the federal Endangered Species Act and state Imperiled Species List, the manatee is threatened by human-related impacts such as habitat loss and boat strikes, as well as natural events such as cold snaps and red tide.

Rotonda resident Cheri Castillo has been visiting the island beaches every weekend for the past several years. She said she saw about 12 manatees close to the beach at 17th Street last Sunday, May 15. At first she thought it was just a patch of seaweed until she went out in the water to observe the situation more closely. “It was amazing. They were there in the same spot for almost three hours. Their main mission seemed to be geared toward getting the female beached so they could mate. It was just incredible that they were in such shallow water,” Castillo said. She said she spent the afternoon not only getting photos and videos of the manatees, but also explaining to tourists that it’s illegal to approach or chase manatees. She said several people were swimming right in their paths and crowding them, which forced the creatures to keep swimming north. “I’m very respectful of wildlife and kept my distance, but I could see how it was tempting to get closer to them. It was just captivating,” Castillo said.

She said there was an eight-year-old boy on the beach who was warning people that there is a fine for touching them. “I thought it was great that such a young boy was setting such a fine example for the adults in the water,” Castillo said. She spoke with a lady on the beach that day who lives on the island and said she has never seen a pod that large come so close to the beach in all the years that she’s lived here. She said the woman’s husband quickly grabbed a Go-Pro camera and headed out to get some underwater footage. Another man passing by in a boat thought the manatees might have accidentally beached themselves, and he yelled to people on the beach, asking if any help was needed.

Manatees inhabit rivers, bays, canals, estuaries and coastal areas moving freely between fresh, saline and brackish waters. Florida estuaries and freshwater lakes, springs and rivers provide extensive beds of seagrass and abundant freshwater aquatic vegetation that serve as the manatee’s primary food sources. Just as important is warm water habitat. Manatees cannot tolerate prolonged exposure to very cold water (below 68 degrees), and in the winter they’ll migrate to areas of warm water for survival. To help sustain a healthy population of manatees in Florida, the Florida Fish and Wildlife Conservation Commission and other partners and stakeholders work together to manage the protection of Florida’s seagrass and warm water habitat resources. FWC Officer Stuart Spoede said it is illegal to touch or interfere with manatees in the wild. “We usually have an officer stationed in Boca Grande, especially during tarpon season. And we try to get out and educate people as much as possible,” Spoede said. While many times officers will give a written warning to tourists or people who are unaware they’re breaking the law, they will often issue a misdemeanor citation and the person must appear in court. Any fines will be determined by a judge, depending upon the severity of the offense. Spoede said while manatees can mate at any time, most are witnessed doing so from late winter through early spring in very shallow waters.

If you see a manatee in shallow water, FWC officials ask that you please give them space. If you notice a sick, injured or dead manatee, call the Florida Fish and Wildlife Conservation Commission’s toll-free number at 888-404-3922. Be prepared to give the exact location where you spotted the animal.

Newer PostSundown puts the rest to bed at WRTT
Older PostCars in the trees, a battery and a theft reported