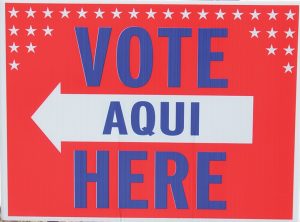 BY MARCY SHORTUSE – There weren’t too many surprises in the unofficial final election results from the Precinct 18 polling place at the Boca Grande Community Center, as the Republican candidates swept the field by a heavy lead among the 972 filled out ballots.

There were 480 mail-in ballots recorded, 13 early voters, 477 voters who came to the polls on Election Day and one provisional ballot documented. 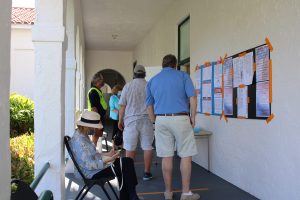 Marceno won countywide, and will continue on as our sheriff.

There was only one candidate listed for Lee County Property Appraiser, Rep. Matt Caldwell. He received 776 votes, and there were 10 write-in votes. He also won the popular vote throughout the county.

For the Board of County Commissioners District 1 seat Kevin Ruane (REP) was the only candidate listed. He received 769 votes. There were 13 write-in votes for that position. He won countywide as well.

In the Board of County Commissioners District 3 race Ray Sandelli (REP) held on with 666 votes (73.35 percent) and Dem. Todd James Truax received 242 votes (26.65 percent). He won countywide as well.

In the race for the Justice of the Supreme Court entry, Carlos G. Muniz was given 589 “yes” votes in Boca Grande, and 154 “no” votes.

For the complete results, go to lee.vote.

While details are not forthcoming for our Charlotte County island voters who went to Precinct 78, American Legion Post 113 in Rotonda, we know that Trump took the lead there with 194 votes compared to Biden’s 111 votes. Jorgenson received five votes. Sheriff Bill Prummell will retain his position as sheriff, as he won over candidate C. Dale Ritchhart Jr. There were also 315 write-in candidates recorded countywide in that race.

All of these results were unofficial as of press time.

Overall in Charlotte County there were 56,853 mail-in votes recorded; 44,389 early votes; 15,661 voted on Election Day; and there were 185 provisional ballots recorded.

Voter turnout was reported to 77 percent in Charlotte County, For more information go to charlottevotes.com.