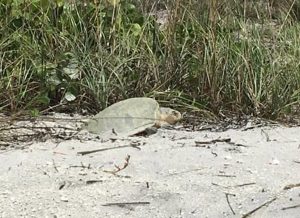 Turtle patrollers have being seeing lots of loose dogs out on the beach lately. Please help protect this very rare species by keeping dogs off the beach or on a leash.

Subtropical Storm Alberto stirred up the water surrounding Boca Grande, and there was a good amount of wind, but fortunately no nests were damaged.

“We have a few nests that were washed over by waves, which may impact their survival but we are hoping for the best,” said Boca Grande Sea Turtle Association Board Member Melissa Csank. “We have also lost a couple of nests due to erosion, but overall, we were very lucky.”

Please remember to take your trash with you when visiting the beach. Patrol members have been picking up large amounts of litter from the beach daily.

Also remember to fill in any holes in the sand. The holes can hinder a nesting sea turtle’s ability to lay her eggs at a safe area on the beach.

All beach furniture should be removed at night.

Turtles may become trapped in furniture and get stuck in holes on the beach.

Bright lighting can misdirect and disturb nesting sea turtles and their hatchlings, so beachgoers should avoid using flashlights or cellphones at night. Turning out lights or closing curtains and shades in buildings along the beach after dark will ensure nesting turtles are not disturbed as they come ashore and hatchlings will not become disoriented when they emerge from their nests.

Nesting season lasts through the end of October.

Wherever you are, other ways to help sea turtles include properly disposing of fishing line to avoid entanglements, and reporting those that are sick, injured, entangled or dead to the FWC’s Wildlife Alert Hotline at 888-404-FWCC (3922) or #FWC or *FWC on a cellphone.

Turtle patrollers help keep the beach clean, flat and turtle friendly among other important duties. They also get out to enjoy our beautiful beach at one of the most beautiful times of the day.

If you’re interested in being part of the turtle patrol program, please send an email to bocagrandeseaturtles@gmail.com or search for the organization on Facebook.

Newer PostBig game fish: The sharks that swim in our waters, the people who love them and the people who fish them (Part two of a series in three parts)
Older PostMangrove fishing, then the Pass makes for a great day