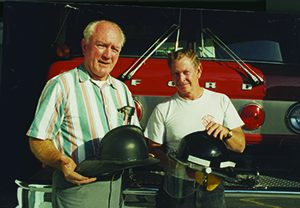 BY MARCY SHORTUSE – On a hot July day in 1989 a man named Lewis “Lew” Morgan was introduced to the Boca Grande Community. He stood next to Darrell Polk, a man who had held the job of fire chief on the island for 33 years.

“I hope I can be the fire chief you want,” Lew said, as Darrell stepped down from the job and he stepped up.

There are none who could dispute that Lew held true to his word, and he became not only a legendary chief, but a great, great friend to many in Boca Grande.

Lew Morgan passed away on Friday, Sept. 9, at Tidewell Hospice in Englewood. He was 78.

Lew was three when his family moved to Sarasota from New Jersey, the last place their family lived prior to settling here in Florida. Lew finished high school there, then went into the Army for three years. When he got he first considered joining his father in the plumbing business, but firefighting called to him. He was 24 at the time, and the country was facing a recession. He knew he needed a job he could stick with, a job that would always be around. He focused in on firefighting like a moth takes to a flame.

When he was hired by Sarasota Fire he was in the first organized firefighter class ever conducted in the city. Prior to that firefighters were literally introduced to their job with the “trial by fire” method. He later returned to the academy with the roles reversed – he was the teacher. 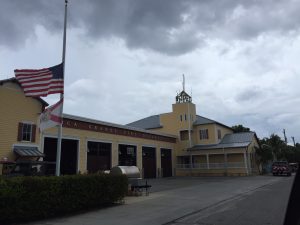 His first paycheck as a firefighter for a 56-hour work week was $3,700. He was always on call and was never paid overtime, but it didn’t dampen his enthusiasm for his work.

After 27 years with Sarasota Fire he had become a battalion chief. By the time he came to work in Boca Grande in 1989, he had been to the National Fire Academy in Maryland three times. Lew was always updating his skill set and exploring the newest firefighting techniques and procedures.

When Lew became chief of the Boca Grande Fire Department there were about 10 volunteers. In the first three years he was here he built that number up to 32 volunteers, all registered with SCTI, all trained and certified as firefighters.

Lew and his wife, Sandy, lived in an apartment in the back of the fire station. Sandy volunteered as fire dispatch while Lew trained and supervised the island’s volunteer firemen and maintained the station and equipment.

He retired from the Boca Grande Fire Department in 1989, and while he moved up to Englewood since then he had many, many island friends who never forget – and will never forget – Lew Morgan.