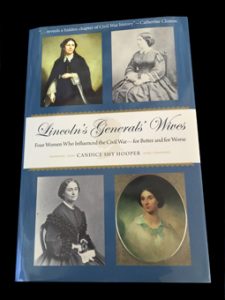 Island resident Candice Hooper has been making waves in the literary community lately, not only with an award-winning poem but a book that might change the way people think about the Civil War; a book that has taken her eight years to research and put together, and has taken her to the halls of the Library of Congress and battlefields along the way.

The book, titled “Lincoln’s Generals’ Wives: Four Women Who Influenced the Civil War for Better and for Worse,” gives insight into the relationships Lincoln’s general’s wives had with their spouses, their thoughts on the president and the war, and the differences in how they handled their husbands going to war.

The book is available for pre-order on Amazon.com and at independent bookstores, but the official release date is not until May 31.

Hooper delves into the early lives of Jessie Fremont, Nelly McClellan, Julia Grant and Ellen Sherman, and gives insight into what circumstances made them act the way they did once shots were fired over Fort Sumter. She has lived and breathed these women close to a decade, so much so that the detail provided in the book is superb.

“My husband feels like he’s been living with five women for the last few years,” she laughed.

Hooper’s great-great grandfather fought in the Spanish-American war, and her father was a Navy corpsman. She was an early and avid reader, and combined with her interest in military history, that has been with her all of her life, so writing a book of this nature seemed like a sure thing.

Her interest in Civil War history, however, is more recent. Her major field of study was the Spanish-American war, and it was the subject of her master’s degree thesis, but living around so many Civil War battlefields in Arlington, Va. (she was actually right next to a former Civil War camp, Fort Ethan Allen, one of 63 forts built around Washington to protect it during the Civil War) seemed to rub off on her eventually. One day she purchased a book called “An Army at Dawn,” by Rick Atkinson, which was about the invasion of Africa in World War II. When she went to put it in her bookcase, she found there wasn’t any room.

“So I took every book out of the house and put them in piles on the floor in my basement,” she said. “The biggest pile was about military history. That’s when I went back to school at the age of 55 and got my master’s degree in history at George Washington University. It opened a world to me that I just find so fascinating. I took several courses on the Civil War, and in one of them I focused on William Tecumsah Sherman,” she said. “realized Sherman’s wife had gone to see Lincoln when he was in trouble, and then I found out Fremont’s wife did the same. Then I wondered if Lincoln had met with all the military wives. After all, he had an open door policy, people always came to see him.”

When she got her master’s degree in May of 2008, she didn’t know what to do next. She thought she would write about the Spanish-American war again, but the topic of Lincoln and the generals’ wives stayed in her head. She thought she would write an article about it, but after talking to two friends –­ one a Civil War expert and the other a military history professor – she took their advice and decided to turn it into a book.

Candy spent a lot of time at the Library of Congress and The University of Notre Dame, while also traveling and doing general research. She read through transcripts and newspaper clippings and traveled to battlefields. Because of that research, she was able to put together some highly detailed maps of where the generals’ wives traveled during the Civil War. One unique piece of history was that, while Grant’s wife traveled more than 10,000 miles to be by her husband’s side, Fremont’s wife traveled very little.

“You can read the story of their relationships just by looking at the map,” she said. “I was able to visit the childhood homes of Sherman and his wife, who grew up right next to each other. To visit those homes, particularly the Sherman house, which is now a museum, gave me a sense of them that I wouldn’t have had if I hadn’t made that trip.”

She also learned something about her own mother, who had traveled the world to be near Candy’s father. When she started to add up the miles her mother logged while moving their family from place to place, she realized that 10,000 miles was a drop in the bucket.

Candy was born in Guam but also lived in Norfolk and Saipan. She realized a part of what her mother had sacrificed to keep them all together.

“When I was working on the book and doing the math on Julia Grant’s travels, I sat down with my mom and realized that first trip to Guam alone was 10,000 miles,” she said. “This has been a very interesting eight years, and I feel like I’ve learned more about my own parents during this time, too.”

While this is Hooper’s first book, she has had an article published in the New York Times called “Disunion,” which focuses on Julia Grant and her slave, Jewel, and how they traveled together.

She has also been published in the Journal of Military History, a peer-reviewed publication that isn’t easy to get into. She has also done book reviews for the Michigan War Studies Review, and the National Parks Service has asked her to provide a more detailed crinology of Julia Grant’s travels.

On Saturday, April 23 Candy was honored in Sarasota by winning the poetry contest held by PoetryLife. Her poem, titled “Fawns in the Field,” is below and chronicles a personal incident that occurred when she was in Montana. She hadn’t considered herself much of a poet until she met Boca Grande resident (now deceased) Fred Berger at the Civil War program held at the Boca Grande Community Center. He was part of the Live Poet’s Society of Boca Grande, and he asked her if she was interested in joining. When the Live Poet’s asked her to sort through the chronology of some poets, she accepted.

“Once you at all think of yourself as a poet, things look different to you. Experiences come to you in a different way. We had this experience in Montana, trying to save fawns that were almost run over by a tractor, and all I could think of was to sit down and write it. Before I met Fred and the Poet’s, I would never have done that.”

Candy had been frequenting a bookshop in Sarasota, and while she was there she saw some information on a group called PoetryLife. They were having a contest, which she went home and told all of her island poet friends about. She certainly never thought she might be the one to win. The judge was Rick Hillis, the man in charge of the master’s of fine arts program at Vanderbilt University. It was a blind judging.

Candy was recognized in front of her peers at a ceremony, and she realizes now how much that meant to her. But her heart is still with the war, and the layers and layers of information that can be peeled back like an onion skin to reveal new truths … even this many years later.

“There are so many ways of looking at the war,” she said. “We always think about how the North invaded the South, and how the war came to southern women’s homes, but we don’t think about the wives who took their homes to their husbands. This is a big story that people haven’t looked at because, for the most part, historians look at women who did unusual things … the spies, the nurses, the prostitutes. This is the story of the women who were wives and mothers, and still had a profound impact on the war.”