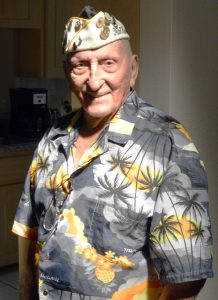 Pearl Harbor survivor John Seelie, who attended the 75th anniversary ceremony of the attack on December 7, 2016, has passed away.

Seelie, 94, was a resident of Englewood and for years would ride his bike from his home to Boca Grande to have coffee or enjoy lunch on the island with friends. He stopped those rides when he turned 88, but continued to work out at the YMCA daily. He was also an avid fisherman and fished around the island often.

Gasparilla Inn golf course employee Cathy Joel lived next door to Seelie. After meeting him and learning about his life, she started a GoFundMe account last year hoping others might contribute funds and help send the Veteran to the anniversary ceremony in Hawaii. And it worked.

Stories were published in the Boca Beacon and the Englewood Sun and local television stations interviewed Seelie. Word continued to spread and soon enough money was raised for the trip.

“So many people from the island opened their hearts and the trip was outstanding,” Joel said. “John was a great conversationalist; witty and sharp as a tack. It was an honor to be a small part of his life.”

Seelie, a Cleveland, Ohio native, was a 19-year-old soldier stationed at Schofield Barracks on the morning of the attack on Pearl Harbor. He not only fought at Pearl Harbor but also at the Battle of Guadalcanal in World War II.

“I’ve served in several battles, but I’m probably one of the last men standing from the Pearl Harbor attack,” Seelie said in an interview with the Boca Beacon in 2016.

He was also a Golden Gloves boxer in the army with a record of 29-0 in the ring. Seelie was thought to be the last living witness of the airstrike on Wheeler Army Airfield during the broader Pearl Harbor attack. He was serving in the Army’s 25th Infantry Division when he and several other servicemen were given the choice of whether they wanted to serve in Hawaii or in the Philippines. When they all chose Hawaii, the decision was left to a coin flip. Seelie won and went to Hawaii, where he was stationed at Schofield Barracks near Wheeler Airfield. He was scheduled to box the night the attack occurred.

But the match never happened when he woke to find Japanese planes dropping bombs on the airfield. It was the beginning of a long war. He contacted malaria in Guadalcanal and was discharged a few months later. He returned to Ohio and met his wife, Betty, and started a family. Seelie didn’t speak publicly much about his service until he retired to Englewood and started taking part in annual ceremonies commemorating Memorial Day, Veteran’s Day and the Pearl Harbor attack.

Last year, friends presented him with a special custom-embroidered shirt to wear to Pearl Harbor for the 75th anniversary ceremony. The presentation was made at Lemon Bay High School during the school’s tribute to Veteran’s Day.

He made several trips back to Hawaii over the years, the last one being the 75th anniversary in 2016.

While helping Seelie fill out 17 pages of forms to attend the anniversary ceremony last year, a friend, Mike Cahill, asked what his middle name was. Seelie replied, Custer, saying that he was a blood descendant of General George Custer.

“I knew the guy for four years and every conversation we had together, I learned something fascinating about him,” Cahill said.

Cahill said John’s last wish was granted when he visited the 9/11 Memorial last May.

The trip was funded by the Denis V. Cooper Wishes for Heroes Foundation, a non-profit organization in Sarasota that grants wishes for military heroes.

A crowd of 55,000 people gathered at the plaza on that morning in May, and Seelie was escorted with an umbrella of military leaders as well as a motorcade of police. Seelie arrived at the memorial draped in a World War II 48-star flag and wearing his Pearl Harbor survivor cap and custom shirt. At exactly 9:59 a.m., the time the south tower collapsed, Seelie saluted for nine seconds. He later saluted for 11 seconds, in remembrance of the north tower. It’s believed he was the only known Pearl Harbor survivor to visit Ground Zero, tying together the worst two attacks on American soil.

“It was absolutely historic,” Cahill said. “It was wall to wall people. To see the man who stood outside hanger one – who was one of the first guys to shoot back and defend our country at the beginning of World War II – it was truly an honor and a privilege for people.”

Seelie had dinner that evening with a retired head of the Pentagon and the New York Chief of Police. The white and bleu lei he wore at the ceremony was freeze dried and will become a permanent part of the 9/11 Memorial as well as an acrylic painting of Seelie.

There are several video interviews with Seelie on YouTube. You can hear him talk about his experiences by searching for Pearl Harbor survivor John Seelie.