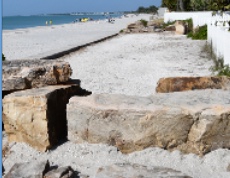 In an odd turn of events, the residents at the end of 3rd Street, also known as “the people with the orange rocks,” have targeted local historian and generational Boca Grande resident Robert Johnson in a lawsuit regarding his letter to the editor in the Boca Beacon that ran just recently, and for “trespass to chattels.”

According to public records, papers were served to Johnson in his home in the last few days.

The people who filed the suit are the owners of 301 3rd St., Douglas and Carolyn Comrie. The case, 20-CA-000002, was a civil action filed in the Twentieth Judicial Circuit Court system. It names Johnson as the defendant and the Comries as plaintiffs, with their attorney, Charles Jones, listed as well.

Jones has been made somewhat infamous on the Boca Beacon Facebook page for responding to stories and editorials that have been posted in recent weeks regarding the rocks the Comries placed on the Promenade … a rather unique venue in which to defend his clients … and for threatening the paper with litigation.

In the civil action it is explained that subsequent to their purchase of the home on 3rd Street, they had evidence that people trespassed on the property and left golf carts, trash and debris, causing damage.The Comries state in the civil action that they placed large stones at each end of their property to restrict golf cart access.

The civil action continues, stating, “In response to Comrie protecting their property from damage, on or about November 15, Johnson allegedly made defaming comments about Comrie placing the stones on their property to an editor (Marcy Shortuse) at the Boca Beacon, which is a newspaper in general circulation.”

The civil action goes on to describe other comments Johnson allegedly made about the Promenade, including the fact that people had been trying to block it off for at least 50 years, and that it was time it stopped. It alleges that Johnson claimed the public should have the right of way, and that the County should act in the public interest.

“Johnson’s comments were clearly intended to ridicule and cause damage to the Comries,” it stated.

The civil action then says that on December 19, Johnson drove his golf cart from the public beach access near his house two miles up the beach to the Comrie home to look at the rocks again. On December 20, it says, the Boca Beacon and editor Marcy Shortuse posted a picture of those stones.

Under the “Count II – Trespass to Chattels” portion of the civil action, it says the Comries are asking for more monetary damages, exceeding $5,000 but less than $15,000.

The summary under Count II alleges that Johnson deemed the large stones “his own” by spray-painting them with permanent orange paint; that his alleged spraying of the stones “impaired the condition, quality and value of the rocks”; that the Comries have been “deprived the ownership of natural stones free of permanent orange spray paint”; and that the Comries were “harmed by Johnson spray-painting the natural stones with orange spray paint without the Comrie’s consent or knowledge.

In recent years Lee County has decided that all issues regarding blockages of the Promenade, a walkway that was deeded from one corporation to the people of the island in 1927, need to be handled in civil court, and that they weren’t in the business of handling private deed restrictions in their code enforcement department.

If you are interested in reading the civil action in its entirety, go to https://matrix.leeclerk.org/Cases/Search and type in 20-CA-000002 in the “case number” category.