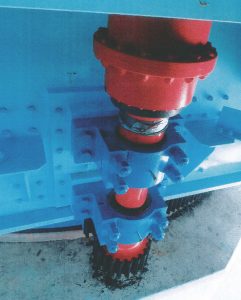 After several months of intense research, the Gasparilla Island Bridge Authority thinks they have narrowed down the cause of a popping sound under the new swing bridge when it opens and closes.

It’s not arthritis, the bridge isn’t breakdancing, and it’s probable a little dry ice will fix the situation nicely.

At the GIBA engineering committee meeting on Wednesday, April 26 Peter Strong – the head of the committee – explained how the size of four little holes is the culprit. Strong said a Florida Department of Transportation inspector found the problem last fall, and told GIBA they should look into what was making the noise.

“They said while it was undesirable it wasn’t that the bridge was going to fall down,” Strong said. “It took us a long while to figure out what it was, it was just a loud noise like someone hitting the bridge with huge sledgehammer during openings and closures. The process started with denial; we thought that nothing was wrong, bridges always make noises. We subsequently began to have meetings, both in the conference room and underneath the bridge. Finally we have figured out what we think is causing the noise.”

A pinion block is the problem. There is a coupling below the main driving mechanism of the bridge that attaches to the pinion shaft, which is held together by two bearings. Then you have the main gear, as well as the top gear that meshes with another gear that moves around the center piece of the swing bridge mechanism. This pushes against the main ring gear and forces the bridge to move.

“What is happening when you have a structure as heavy as this, is that it takes an enormous amount of force to move it,” Strong said. “Once you get it into motion, once it starts swinging, much less power is required. It’s during the initial strain to get bridge to move that we discovered the lower pinion bearing is moving in relation to the light blue background beam. What’s happening is it’s putting a lot of force in it, and it pushes the bearing when the bridge is opening. Instead of opening bridge it wants to push the bearing.”

Strong said they confirmed a slight movement in the lower pinion bearing base relative to the pinion girder mounting surface which is extremely miniscule but enough to make the popping noise. The total amount of movement is about .008 inches. Strong said you could feel the vibration when the bridge moves, and it appeared to have gotten worse in the last six months. There was also cracked paint around the area, proving there was stress on the pinion block.

“They made the holes too big,” Strong said in summary. “When they drilled the holes for the bolts that hold the mechanism onto the bridge, Hardesty & Hanover specified Class One bolt fittings, but by the time the shop drawings were done someone had made an error and they showed that the bolts were a Class Six fit. It wasn’t picked up by H&H, it was approved by Kisinger, Campo and Associates, and it was overlooked by us as well. That means everyone is responsible for the error.”

Strong said this was the only Class One fit on the whole bridge, out of several thousand bolts.

So how does GIBA propose to fix the problem. They went through several different scenarios, including replacing the bolts one at a time. The problem is, the pieces were put together with a precision fit which includes shims that were put in exact placement that would shift if those four bolts were removed.

“The solution we came up with is to put in one-inch precision dowel pins,” Strong explained. “We will drill precision holes to add them, but we will leave the mechanism in place while doing it. They are known as interference fit pins. We will freeze the pins in dry ice on site, let them shrink, have our holes already drilled, place the pins, and when they warm up to room temperature they will have an interference fit after expansion. The challenge is to drill the hole exactly right, through steel, through stainless steel shims and through the cross beam.”

The pins will be located between the existing turned bolts on either side of the pinion, which pins that should be at least 1 1/2 inches deep into the mounting plate that is welded to the pinion girder. The process will require a bridge closure to boat traffic of seven days. They simply cannot afford to move anything while the job is being done, Strong said. GIBA has already issued a closure request to the Coast Guard for August 7 through August 14, but that is subject to change if there is a storm during that time.

“There is a 90 percent probability the noise will go away when this fix takes place,” he said. The GIBA board voted in favor of moving forward with the plan at their quarterly meeting.

The engineering committee also discussed discontinuing their exclusive engineering contract with KCA, which they have had for many years. Strong said the reason for the move is primarily to be able to have flexibility in hiring subcontractors for the bridge’s various engineering needs.

“We have used KCA for many years, and it was clear from the experiences we went through in building this bridge that we ideally would like one company to cover all types of engineering services,” Strong said, “but such a company does not exist. Instead of going out for one company and recommending them do everything, we would like to have a list of companies and hire for ourselves. KCA did well with the fixed bridges, but we need a lot of experts to deal with the swing bridge. The swing bridge is a different machine, and now that this project is complete and the bond issue is over, we don’t need an engineer of record,” Strong said.

The board voted in favor of the engineering committee’s suggestion, and Executive Director Kathy Banson-Verrico will be compiling a list of potential engineering companies to use in the future.