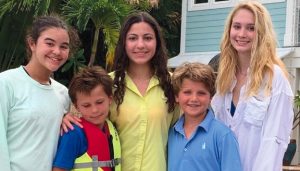 Charlie Ruth and Matthew Jaeger spent the Fourth of July like many other people on the island did – boating and fishing the water surrounding Gasparilla Island.

But they also had another important mission to complete later in the afternoon.

As they were pulling up to the dock at the canal to their home on Palm Avenue, they noticed three young girls in distress. The girls had been following their parent’s pontoon boat and took a turn they shouldn’t have made and ended up getting lost.

Four hours later, their parents were worried out of their minds and had called the coast guard and the sheriff’s office.

A rescue boat launched and a search helicopter was dispatched to search for the girls.

That’s when much to everyone’s surprise, Charlie and Matthew pulled up to the dock to park their boat and asked the girls if they needed help. That’s when the boys learned they were lost.

“I was kind of shocked when I saw them,” Charlie said. “I felt bad for their parents because I knew they must have been really worried.”

They boys were familiar with the area where the girls were vacationing, and led them back to their parents at a home on Jose Gaspar Drive.

The incredible part of this story is that Charlie is just 10 years old, and Matthew is nine. They met on the island several years ago and instantly became very good friends since both of them love boating and fishing. Charlie recently completed a safe boater certification course and has been operating a dingy in intercoastal waterways since he was about six years old.

Charlie’s parents, Lisa and Chris Ruth, have been coming to the island for years. Lisa would visit the island regularly as a child because her grandfather had a home on Palm Avenue.

“Then my parents retired here about 25 years ago, so we’ve been coming several times each year for Thanksgiving, Christmas, Easter and the 4th of July,” Lisa said.

The family lives in Gulf Stream, Florida, just north of Delray Beach on the east side of the state.

Charlie had his boater’s license and Matthew owns a little Scout boat that they often take out around the island, and they regularly fish together at Whidden’s Marina.

Matthew’s grandfather, Rod Rodriguez has a home on Waterways Avenue on the island.

“I felt like the girls were probably new boaters and that we should help them,” Matthew said. “I don’t think they were from this area, which is probably why they were lost.”

Charlie said it was about a ten-minute boat ride away from his family’s dock. He drove the boat and the girls followed behind on the jet ski, leading them back to their vacation home on Jose Gaspar Drive in Boca Grande Isles. He suggested they might want to pick up a map of the island before heading out on the water again.

“The sheriff’s deputy was so impressed and amazed with the heroic behavior of the two young boys,” Lisa said. “We were so proud of them.”

Newer PostIn case you were wondering …
Older PostIf you want to learn to sail on Lemon Bay, you’d better sign up now