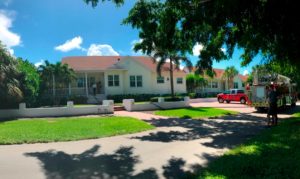 Sporadic and intense lightning storms were named as the culprit in two fire incidents that occurred this week.

The second call came in as a structure fire on Thursday, Aug. 8 at 11:10 a.m. at one of the Inn cottages on Lee Avenue.

As of press time it is believed that lightning hit the cottage last night and started a slow-burning fire that wasn’t noticed until the next morning.

Newer PostIt’s high tide at midnight: Do you know where your tarpon is?
Older PostUPDATE: Lee County Code Enforcement sweeps island on Friday, closes some complaints