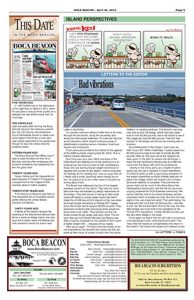 After my letter to the editor in the Boca Beacon appeared a couple weeks back Ms. Watkins, chair of the bridge board, called me at my home. We had a civil conversation about what had transpired at the public meeting. She assured me the board is doing everything in their power to bring the bridge through its final stages of construction and then up to its full working potential. She told me she had concerns about the tone of my letter especially the part where I said all you have to do is “tip” the attendant. She told me this was a serious accusation and that it was a fireable offense. I told her I wasn’t referring to G.I.B.A employees I was referring to the added expense that was being suggested by the board put on vendors to the island. I was addressing bridge policy, not that the toll takers were on the take. We were told at the meeting any load over 40,000 pounds or any extra wide load would require traffic to be shut down in both directions requiring “attendants” carrying flags escort the truck over the bridge on foot.

This scenario would cost the trucking firm a one-time $500 fee and a hundred dollars per trip thereafter. That was the tip I was referring to. I thought I made that very clear to Ms. Watkins. Well I guess nobody got the memo because last Saturday when I stopped to get my card scanned the toll collector on duty got on a walkie-talkie and informed the crew that that guy is here, the one that sold us out. I want to assure every employee of our bridge that my beef is with our board, not the fine selfless service you provide. My problem is with the board’s policy, not toll collection. Most people that know me and my politics know that I usually side with the rank-and-file.

And the beef goes on….

A “proud homeowner and winter resident” took me to task over the same letter. Mr. Balzer said I had fallen into an oxymoron trap.

Oxymoron, according to the dictionary is a figure of speech by which a locution produces an incongruous, seemingly self-contradictory effect as in “cruel kindness” or to “make haste slowly.” Now, I’m no Hemingway but I don’t think it was me that fell into an oxymoron trap. Yes I used an oxymoron to illustrate when winter residents who arrive by the hundreds expect solitude. They arrive in cars by the scores and wonder where to park, then rationalize it must be all those tourists on the tour buses. The tour bus theory is not an oxymoron it’s just false. The Boca Grande Bridge Authority traffic flow analysis pointed out that buses make up a fraction of  the commercial vehicles coming onto the island at five percent. That’s my point, we have met the tourists and they are us.

Mr. Balzer, I am happy I can keep y’all entertained with my philippic diatribes because it is your elitist, dismissive, condescending attitudes that fuel my prose. So stay tuned.

P.S. I don’t mean to hang this elitist moniker on all our winter friends, just the ones that think upon their arrival island life starts again.