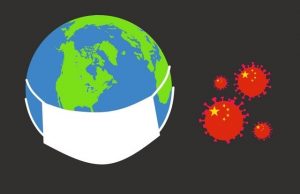 It is way past time to logically discuss the evil-villain, the invisible-monster running wild in the world.

We need to begin in China where an incomplete science-experiment Coronavirus escaped from wherever you want to believe it resided and in whatever manner most fits your beliefs. These details won’t matter until it is time for reparations.

Prior to this viral escape, China was already 40 years down the road in their economic warfare against the world (thank you President Nixon), and in particular the Unites States; stealing our technology, our proprietary knowledge, our manufacturing, and our wealth, while manipulating our politicians, mediots and general beliefs.

Suddenly they shut-down their whole country, or at least all the large cities and their economy, locked everyone in their homes, bought every N95 mask in the world thanks to Amazon, started fogging their cities with disinfectant, sent their bio-weapon defense command to take over the Wuhan lab, etc.

In early January Chinese medical research scientists discovered that this virus attached to human DNA at a point extremely common among Chinese people.  (Hum, how much earlier in time did they know of this virus and realized they needed to study it?)  80 percent of all Chinese have that spot on their DNA, while in their tiny sample of Europeans only 50 percent had this DNA.

They temporarily shut down their economic war because the CCP were fearful of the impact within their country (their culture doesn’t have any regard for the life of the average peasant), they were worried about their economic engine, and they knew that their healthcare system was totally inadequate. They feared self-destruction and losing the war they started. They thought they could shut down for one month, stop the virus and preserve their economy.

Then they realized this was another opportunity to attack the world. If their economy was going down, then they needed to level the playing field and take everyone else down a step to match them. I believe they had no idea of the havoc they were about to create. If they had, I don’t believe they would have intentionally created the situation where every company in the world is going to begin moving their manufacturing out of China.

They intentionally sent infected people around the world. Taiwan caught them sneaking in an infected person, who wasn’t on the manifest, on a relief flight that was moving their residents back to Taiwan. Most of the world ignored this report and other reports from Taiwan. Trump shut down travel from China only two or three days later.  However, it took too long to realize that China had also sent the virus towards us by way of Europe.

They claimed asymptomatic spread and got their WHO boys to make the same claims. They created fear and panic.

Why Northeast Italy? An aged population. There was already a massive economic effort underway in this region between China and Italy. Herds of people flying both directions. Infection was guaranteed to happen fast and fuel additional panic.

By the way, the new panic-fueling claim is reinfection, which also originated in China and is now echoed from a few countries, such as Singapore, where China has massive influence.

Psych ops, that’s what this is.

Let’s talk about asymptomatic spread. This claim that you can become infected by the virus, millions of these little suckers can grow in your body for two weeks, during which time your body’s immune system doesn’t react. Meanwhile you have grown enough of them that you can spread it everywhere. If you believe some of the supposed scientific claims you can be infected with the virus without symptoms, walk through the grocery store, and four hours later someone walks within 21 feet of where you stood and they catch the virus.

The common cold is a Coronavirus. Yes, there are a few very deadly Coronaviruses that spread after very close contact, such as Ebola. However, they are so aggressive, so strong in their capability to overwhelm our immune system, so quick to take control, people become extremely sick, die and they don’t spread very far.

In general our bodies are extremely competent at dealing with Coronaviruses. Our bodies identify them and respond quickly. If our bodies didn’t have this ability, the common cold would have caused humans to become extinct long before they had the chance to build the Great Pyramids.

What logical analysis tells me is that, for most people, this virus in no different than the common cold.  There is some yet-to-be-discovered or reported factors that cause a relatively few people to become seriously ill and some die (more about this later).

The assumption of logic defying asymptomatic spread is a false assumption.

Our bodies do react. As soon as the virus arrives our immune system begins working. The initial symptoms are minor. I keep reading anecdotal reports that tell me the most common symptoms of this CCP Wuhan Virus are those of a mild cold or allergies, such as sinus problems, runny nose, loss of smell, general feelings of not being quite right. These are indications that our immune system is responding and working. So, we don’t have asymptomatic spread. We have people with mild colds who don’t realize they have the CCP Wuhan Virus and blissfully share it with other people, as they always have when they get a cold.

Just like a common cold, most instances of the virus don’t occur on the high-plains of Wyoming, they occur in the dense population of the NYC metro area where there is the greatest number of people in our country who use mass-transit, elevators, compact office spaces, and crowded sidewalks. And its first home is our sinuses and nasal passages, the best place to live if you’re a virus that likes to travel.

By the time our immune system is working hard enough to generate a fever, the virus is already well on its way to domination of the host body. Measuring temperature is too late in the life cycle of the virus to stop its spread.

Some people do get seriously ill and some people die.  For a long time I’ve been saying we need facts and analysis about this, not generalizations and false data intentionally generated based on CDC guidelines.

From the beginning we heard that people with pre-existing conditions, such as high-blood pressure, obesity and diabetes, were the most at risk.

I have been continually amazed that no one has reported that the other high-risk behaviors, which can adversely impact people of any age, smoking, alcoholism and drug use, have not caused death when coupled with the virus.

Hidden from public sight is the CDC reporting rule that anyone who dies that had or may have had the virus must be reported as a death from the Covid-19 virus, regardless of any other condition, what they call comorbidity. This is the way doctors say that someone had more that one potentially life threatening condition and a pathologist hasn’t taken the time to determine which was the killer. Yet, rather than speaking this truth, the CDC has predetermined that they all died from the virus, rather than they all died while being infected by the virus. An analogy would be to declare that someone who had a heart attack while driving and crashed, died because the car was faulty, rather than because of the heart-attack.

So how significant are the comorbidities?  A few days ago I saw Santa Clara County, Calif. data, which showed that those with comorbidities accounted for two-thirds of the virus reported deaths. Then a NYC hospital system reported that 94 percent of the people they treated who died did so with the comorbidities of hypertension, obesity or diabetes. I keep reading that the normal hospital reporting of deaths during the same time period from those same diseases has dropped to zero. Couple this with no report of mortalities with the comorbidities of smoking, alcohol disease or drug use, it’s easy to reach the logical conclusion that this virus, by itself, is causing very few deaths. Further, I suspect there are many more people with hypertension, obesity or diabetes, who contracted the virus and didn’t become seriously ill or die.

If this weren’t true, then they would be telling us:  ‘if you have hypertension, high-blood pressure, then you are at extremely high-risk and must take great care to ensure you don’t contract the virus, because, if you do, you are dead’.

More likely, and let’s look back at what the Chinese discovered about DNA, there is something else at play that results in the few deaths actually being caused by the virus.

After reading that it can take three to four months for our bodies to produce enough antibodies for a test to detect them, the first anti-body tests are reporting much greater numbers of people have already had the Wuhan Cold. These people must have contracted the virus months ago, November or December. In Silicon Valley, that is easy to believe. Now we learn that 3 million New Yorkers have already had the cold CCP Wuhan Virus. It will be many additional months before the scientists have sufficient data to declare how wide spread the virus has already been distributed.  Don’t forget who told us this virus didn’t show up in China until January (the Chinese, that supremely honest country).  If that were true, then no one in Santa Clara or NYC should as yet have measurable anti-bodies.

Did we have an early heavy flu season, or was this the first wave of the CCP Wuhan Cold? The flu season data is not based on testing for influenza, it is solely symptom reporting.

Why are our per-capita serious illness and death numbers lower than other countries? We have the least pollution; healthiest population; and best health care system of any country in the world. It is not because the governors locked-down their states.

Meanwhile, CCP psych-ops, misleading data, a common cold, the media and mass fear continue to drive our country towards extinction.

Send the medical scientists back to their labs charged with finding the unknown life threatening factors. Tell them to stop talking until they have real answers and solutions.

Cancel all Federal Emergency Disaster Declarations. Cancel the guidelines for returning to work. Let the governors sink or swim based on their own stupidities.

Tell every person in the country, if you think you may be coming down with a cold, or an unusual allergy, or if you suddenly just don’t feel quite right, then you must stay home and stay away from all other people.

Isolate the sick, not everyone else. Just finished listening to two doctors who observed that isolating everyone and excessive usage of disinfectant is reducing the strength of everyone’s immune system.

Release our children, grandchildren, family, friends, employees, acquaintances and strangers. I’d recommend they release themselves and get back to living.

Let those of us who may be at high-risk take care of ourselves.

The President and Vice-President have recently been saying we need to use common sense (an oxymoron). Well, I agree, let’s start using it.

And, then we can move forward to solve the real Govidiot created disaster, an economic depression with hyperinflation. And let’s solve this before China, move our manufacturing home, and send the Chinese students, scientists and financial advisors home.

Since the day a close friend of President Trump died he lost his vaulted insightfulness and has become myopically focused on the false death data.  It is beginning to look like his legacy will not be The Greatest Economy Ever, but instead The United States Died in 2020 from a cold.

Letters to the editor and guest editorials do not necessarily reflect the opinion of the Boca Beacon. Open peer commentary is encouraged.