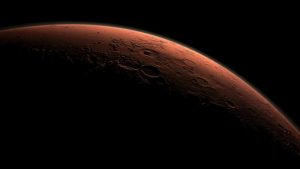 We got our first good look at Mars when Mariner 4 took pictures as it made its closest approach to the planet in July 1965. We made our first landing there in 1976 and, in February 2021, we’re scheduled to land Perseverance, which will undertake the most technologically advanced exploration of the Red Planet yet.

Here on Earth, Mars is growing ever closer to us as it nears opposition (on the opposite side of the sun from the Earth) on Oct. 13, presenting the best opportunity for viewing the planet in nearly two decades — an event ripe for celebration. And The Bishop is doing just that for “Mars Month,” a series of special Mars-centric online and in-person programs throughout September and October.

“Mars Month” programs at The Bishop will explore everything from how we launch the rockets that will get us to Mars to myths about Mars, and even opportunities for in-person viewing.

September and October offer the best opportunities for viewing Mars, but that’s not the only cool thing happening in our night skies this fall. Jupiter and Saturn are also working up to a spectacular action of their own as they move toward the Great Conjunction, which will take place in December. That means they’re getting closer and closer to each other — it’s like starting the countdown for the ball to drop in Times Square on New Year’s Eve. Except the Great Conjunction of Saturn and Jupiter happens only once every 20 years.”