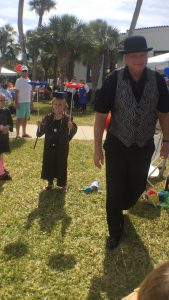 The Boca Grande Woman’s Club held their annual Spring Fair at the Community Center on Saturday, March 25, following the Bike Path parade. “The Magic of Movies” was the theme of this year’s parade and fair, which drew crowds of Hollywood “wannabes.”

On behalf of the Woman’s Club, we want to thank the community of Boca Grande for supporting this event, with additional thanks to the Lemon Bay High School students who marched in the parade and helped during the fair.

We also appreciate members of the Boca Grande Fire Department who helped with setup and takedown.

Woman’s Club Fair, bike parade kudos givenFinally, a huge THANK YOU to Joe Wier and David Bartels of the Lee County Parks and Recreation Department for all of their assistance in putting on “Movie Magic”!

Newer PostPROFILE: Skylar Warren
Older PostLETTER TO THE EDITOR: It was a privilege to be part of ‘World Wars’