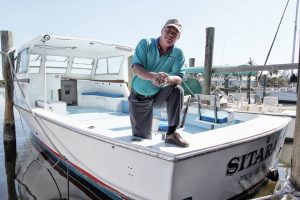 I am Mark Futch, and I am asking for your vote for Charlotte County Airport Authority.

This year’s electoral cycle is a call for change, nationally and locally. The entrenched interests of overpaid, self-promoting, life-long politicians should not be accepted in Washington, D.C. or Charlotte County.

I am running for office because I want to serve our community with the requisite aviation background and enthusiasm for responsible, cost-conscious growth at Charlotte County Airport.

In regard to the Airport Authority, let me explain my agenda:

First and foremost, I want to reduce the corruption inherent in “no-bid” contracts.

Punta Gorda Airport has been practicing a “no-bid’ contract process largely to the benefit of two construction firms. The most egregious, Half Acre Construction, has been involved in tens of millions of dollars in no-bid projects at the airport.

The Charlotte Sun Observer documented one small example of the waste and collusion – a qualified estimate of $1,800 became $11,800 because of the no-bid process – simply to repair drywall. It was only after this public exposure that the airport reportedly began to run open bids.

What happens when this same construction company manages a million dollar plus contract to build overflow parking lots at the Punta Gorda Airport? No- bid contracts are considered scandalous even within the norms of Washington, D.C., so why are we accepting them in Punta Gorda?

Under a public request, I have asked for Airport Authority Assistant Manager James Parish’s email, which he is required to provide under the law. As of this date, we have received only a portion of his email. Through this request, it has been brought to my attention that Mr. Parish is using a private cellphone to conduct airport business. To date, these records have not been provided. Sound familiar?

Second in scandal to these insider contracts are the excessive salaries that these overpaid public servants assign themselves. Mr. Quill is paid $205,000 a year, not including the many perks such as a vehicle, gas and insurance to commute from his home in Bonita Springs.

To give you some comparison, U.S. Senators make approximately $174,000 per year. Taxpayers should be appalled at this kind of self-appointed largess at their expense to manage a small airport.

And why did my opponent spend approximately $8,000 for a trip to Brazil on Airport Authority business?

These are the kinds of things that occur when elected officials remain in a position to feed from the public trough for far too long. My opponent has been in the position for 19 years, and it is time to elect someone new – someone with aviation experience and ideas for sensible growth at the Charlotte County Airport.

Mark Futch is an aviator with 35 years as a commercial pilot and licensed instructor and 28,000 hours as Pilot in Command in aircraft of all types and is one of the most experienced seaplane pilots in the world.