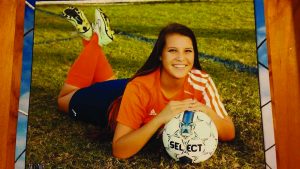 ■ BY SUE ERWIN – Stephanie Tieu is a rising senior at Lemon Bay High School, and she’s been an avid soccer player for the past 14 years. She currently plays forward for the Lemon Bay Manta Rays. Her mom, teacher Tammy Tieu at The Island School, couldn’t be prouder.
The team had a respectable season and won a total of 14 games this year.

But her continued success didn’t come without challenges.

“She suffered a concussion during her sophomore year, and we weren’t sure if she was going to want to play again,” said Stephanie’s mother, Tammy Tieu, who teaches first grade at The Island School. Tammy said Stephanie came back for the new season fully charged and ready to play.

“She was on fire. She’s playing with a lot more confidence. And she works so hard – this was her best season yet,” Tammy said. Stephanie scored 14 goals this season and had 6 assists. The top scorer had 16 goals. “She is a very versatile player. She plays forward, but she will always offer to fill in defensively when needed,” Tammy said. Stephanie said she became interested in soccer the first time she participated in a game at age four.

Stephanie met most of her closest friends over the past several years on the soccer field. Her older brother, Nicholas, played the sport for many years as well. He currently attends the University of Central Florida in Orlando. She’s not exactly sure which college she’d like to play for, but she’s currently looking into a few.

“As of right now, I’m interested in studying either physical therapy or something to do with sports medicine. The colleges I am thinking about attending as of right now are Nova Southeastern University and University of West Florida,” Stephanie said. Soccer keeps her quite busy, and she does not play any other sports. “My biggest role model is Mia Hamm. I’ve been a fan of hers ever since I was very young,” Tieu said. Tammy said her daughter is very serious about the game and participates in team fitness classes led by Lemon Bay High School Coach Katie Cooke during the off-season. “If she’s not doing that, then she’s out running on her own. She won’t let herself fall behind,” Tammy said.

The high school season runs from October through January. Stephanie also plays on the club soccer travel team. “That will make colleges look at her more seriously when they are recruiting,” Tammy said. Stephanie played soccer for Englewood Youth Soccer at the Sports Complex in Englewood when the family moved to Englewood from Massachusetts. She tried out for a travel team in fifth grade and made that. “She really liked to move around and play on different teams, because she wanted to try various coaches and learn different styles and techniques from them,” Tammy said.

Coach Katie Cooke has been the head soccer coach for Lemon Bay for the past four years, and she’s been involved with the program for the past six years. Cooke said that Stephanie’s game has absolutely improved this past season. “She has showed vast improvement in many different skills. She is one of the most hardworking and sweetest kids. And she’s a true team player,” Cooke said. Coach Cooke said that the after-school fitness program she leads three times a week does not just include running but also helps improve stamina and agility. “It is mostly to keep them fit, but we also work on building strength so they can prevent injury. During the summer, we’ll switch the workouts to the morning before it gets too hot out,” Cooke said. She added that she is very enthusiastic about next season, as she expects to have 12 senior players, creating a very strong squad. “It will be our most experienced team in years. I’m super excited,” Cooke said.

Newer PostCars in the trees, a battery and a theft reported
Older PostProfile: Betty Hill