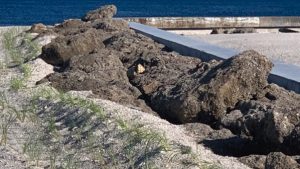 You may have noticed in the last few months that there are some new sea oats growing around some of the beaches and seawalls where the recent beach renourishment project took place. We tracked down the sowers of these oats, and found out that Lee County was the entity responsible.

Timothy Engstrom, public information officer for Lee County, said the oats were sown in late August. They did so, he said, because the sea oats play an important role in maintaining the integrity of the dune systems, as they act as a wind and wave break. They also provide a habitat for many animals and other sea creatures.

Lee County Division of Natural Resources contacted a company called Earth Balance to plant the plants, at a reasonable cost of $7,700.

In other beach news, Jim Yocum, public affairs specialist for the U.S. Army Corps of Engineers Jacksonville District, said they are still evaluating beach calibration reports regarding the shifting renourished sands, and he said that a report will be coming soon from USACE. Local reports show that the sand at the south end that was supposed to shift from north to south has actually done that to some extent, and things are looking better than ever.