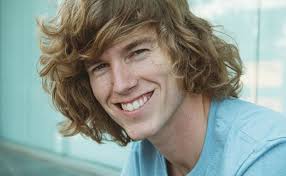 BY MARCY SHORTUSE – A few weeks ago, when the Rowe family heard that prom for Lemon Bay High School seniors might be canceled, Kim Rowe’s daughter had something to say about it.

“You’ll do something, right Mom?” Rowe’s daughter implored. “You can do it, right?”

In the course of just a few days, after prom was officially canceled by the Charlotte County School Board for all high schools in our county, an idea blossomed into a full-fledged plan. Prom will go on for Lemon Bay seniors, thanks to a community who didn’t want to see another group of graduates missing out on every traditional rite of passage normally held during the school year.

“It was at the request of the kids that we did this,” Rowe said. “I started putting together some information on social media and announced that I wanted to lead a parent-led prom. More than 40 parents have stepped forward to help, and there are five people who are really heading up the committee.”

Thanks to Rowe and others, prom will now be held at The Plantation Golf & Country Club in Venice on Saturday, May 1, from 7 to 11 p.m. While some of the planning is still up in the air, the venue is booked and, believe it or not, each Lemon Bay student who attends the prom will have their ticket paid for, thanks to Englewood resident and YouTube celebrity Danny Duncan. 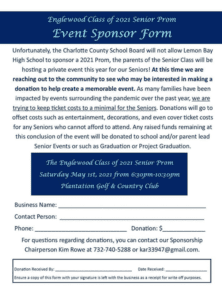 Duncan attended Lemon Bay High School himself and has been a major contributor to many causes in the last few years. He’s gone as far as buying vehicles for families who were in need and giving away thousands of dollars as well. His family still lives in Englewood, and he is seen around quite frequently.

It was after local real estate agent Brian Faro’s company, Paradise Exclusive, made a generous donation to the prom when Brian asked his friend Danny if he wanted to donate to the prom project. When Duncan asked Faro how much it would cost to buy tickets for everyone and was given an amount, he barely hesitated before agreeing to do so.

While being known for a slightly “less-than-PG” presence in his videos (he was recently featured in a video where golf carts were used demolition derby style in Boca Grande), he has a heart of gold and is looked up to by many of the area’s youth … and for good reason.

“This has been such a different year, with so many restrictions,” Duncan said. “I just want every kid to experience prom and have fun, without funds being an issue for any of them.”

Rowe said students who do not attend Lemon Bay but are an LBHS senior’s “plus one” at the prom will still have to pay the $60 for a ticket, which is still far less than the tickets would normally cost.

As far as the change in venue, Rowe said it has everything to do with pandemic capacity.

“We were working with The Gasparilla Inn & Club to have it at the Beach Club, as we usually do, but we have to move off island this year because of COVID,” she said. “The maximum at the Beach Club is 150, and there are 234 kids in the senior class alone. It wouldn’t have given every senior an opportunity to go. We hope it can move back there next year, though, and continue the tradition.”

There is a limited amount of tickets that can be sold to this event, so guests of seniors will receive their tickets on a first-come, first-served basis.

In the meantime, Rowe is still looking for funding for the venue, for a DJ, decorations, payment for off-duty law enforcement officers as security, and other incidental expenses.

“I’m still hitting the pavement for donations,” she said. “For the class of 2021, this is the only social event they’re going to have. There was no prom last year, and no homecoming last year or this year. We have already agreed if there is a surplus of funds, they will roll over to Project Graduation. That is also a privately held event.”

Rowe also wanted to mention that while it is terribly sad that last year’s seniors and this year’s juniors won’t be able to attend this prom, she hopes they will come with an alternative idea such as this for themselves.

“These graduating seniors are just so grateful to have anything this year,” she said. “I know there’s some frustration involved because some kids don’t understand why they can go to class and eat lunch with these same kids every day, but they canceled prom. And I know last year’s graduating seniors are frustrated that they can’t attend our event, as are the juniors. If we could open it up to both of those groups we would, but with the class sizes we have, we can’t. I hope they can find a way to hold their own events. As much as we would love to accommodate them, it just isn’t possible.”

As a side note, masks will be worn by those attending the prom, and temperature checks will be done at the front door.

If you can help with the prom costs in any way, you can contact Rowe at (732) 740-5288 or email her at kar33947@gmail.com. She can take cash or Venmo donations (@engseniorprom2021, look for the name Erica Raymond to make sure you have the right account), or checks made out to her. They are not a formal organization or association, so checks have to be made payable to a private person. Stop by Paradise Exclusive off Gasparilla Road in South Gulf Cove for more information.

You can also go to the “Sip and Shop” event at J. McLaughlin in Boca Grande on Park Avenue, on Saturday, Feb. 20 from 9:30 a.m. to 5:30 p.m., as all proceeds will go to benefit Lemon Bay High School’s Project Graduation. Shop in-store with social distancing or shop virtually. Call or email the store with your order at (941) 885-9163 or stflbocagrande@jmclaughlin.com.

Newer PostEDITORIAL: Something to be remembered by; would you be willing to leave a legacy to the people of Placida and Boca Grande?
Older PostWhat women need to know about heart disease