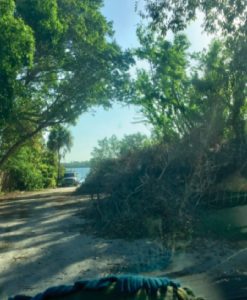 Lee County officials said this week that landscaping waste pickups for the island would begin again very soon, possibly next week. Lee County Public Information Officer Timothy Engstrom confirmed that the large piles of brush around the island – including on 19th Street and on Gilchrist Avenue – should be picked up in the next few days. A local contractor made the rounds just days after the storm and picked up a healthy first haul of debris, nearly 1,600 cubic yards. It is estimated that there are still almost 800 cubic yards of brush left along Gasparilla Island roadways.

Newer PostA remedy to ‘Lake Surprise’ it was not: County digs ditch, only to fill it in again
Older PostTo Boca Grande under sail …