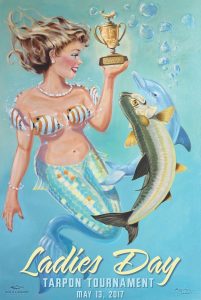 For more than a decade my mom and I fished the Ladies Day Tarpon Tournament together in Boca Grande Pass aboard my dad’s boat – the Salty Cracker. Mom and I love fishing, and it is something many mother-daughter teams share in this particular tournament.

The Ladies Day Tarpon Tournament has traditionally been fished on Mother’s Day weekend, because it is the one weekend during tarpon season when captains would reserve a tide and take their spouses and daughters out on the water to have a family day instead of taking a charter.

In the beginning we were all just out there together, taunting and fishing and waving to the other women in the Pass. Through the hard work of some very special ladies, the first official tournament was fished in 1990. Now, 27 years later, there is as much camaraderie and competition as ever. There are great prizes, and shenanigans too. 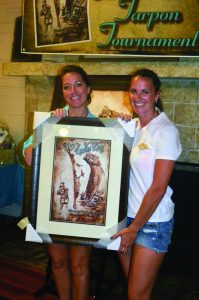 It’s the one big tournament where female anglers flood Boca Grande Pass to raise the mighty Silver King. Most teams are comprised of mothers, daughters, sisters and kin who have been fishing here since the beginning. It is wonderful to be among them and as a tournament artist in 2012, 2013 and 2014.

In 2013 I presented JoEllen Morris with the winning angler prize, a framed print of the tournament artwork. JoEllen is celebrating her first Mother’s Day as a mom of a beautiful little girl! I love seeing this cycle continue and look forward to the day we are fishing with her daughter in the Pass. In 2014 the theme was “Anchored in Tradition,” and I created this art piece of the same name with a mermaid, tarpon and lighthouse along with a coral and rose bouquet for the tournament. The winning angler was Tricia on Team Mama Leslie.

Here’s to all the moms and future moms out there!

Through our teaching, the cycle of conservation and enjoyment will continue!