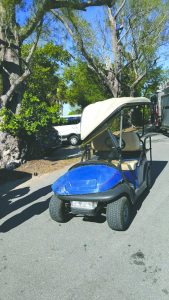 At 11:33 a.m. on Saturday, Nov. 30 Sheriff’s deputies and the Boca Grande Fire Department responded to a golf cart vs. motor vehicle accident in the 400 block of E. Railroad Avenue. According to reports, the vehicle was backing out into the road and was struck by the cart. There were no injuries.

On Saturday, Nov. 30 at 10:35 p.m. Lee County Sheriff’s deputies and the Boca Grande Fire Department went to The Gasparilla Inn & Club for a patient with severe lacerations. It is unknown whether the patient was transported or not.

On Wednesday, Dec. 4 the Boca Grande Fire Department responded to a call for mutual aid for a water rescue. They were sent back before they arrived.