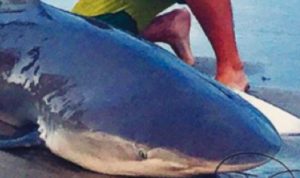 Last summer we wrote a three-part series on sharks in local waters and the people who fish them, as there appeared to be some confusion in the general population as to what is legal and what it not. Apparently that confusion was statewide, and that prompted the Florida Fish and Wildlife Conservation Commission to hold workshops and create some new regulations. The new rules went into effect July 1, and a permit is now required to fish for sharks from land, or from a shore-based structure such as a fishing pier or jetty. In other words, if you are fishing for sharks and you are standing on something other than the deck of a free-floating vessel, or you are older than 65, you must have a special permit to shark fish. If you are younger than 16 and want to shark fish, you have to be able to show completion of the online shark fishing course that is necessary to take to obtain a permit (so you don’t need the permit but you have to take the course), or you have to be with an adult who has a permit, and thereby has taken the course.

Again, if you are fishing for sharks from a vessel you don’t need to take the course or purchase the permit, but it’s still a great information course.

It’s also very easy to take and takes no time at all, and to prove that I took the lessons and the quiz.

If you’ve never been to the FWC remote learning site, you should check it out. You can take courses on everything from gopher tortoise training to shellfish harvesting to videoscoping burrowing owls.

To get to the Shark-Smart Fishing education course for shore-based shark fishing, go to myfwc.com and head to the shark category (or just put “shark” in the search bar on the web site). It’s the first item that comes up.

There are four modules that include an introductory module, a shark-fishing regulations module, a “Shark Smart” module and one regarding shark anatomy and identification. At the end of the modules is a 10-question test. You have to have a perfect score to pass.

Once you pass the quiz you will immediately receive an email with your certificate of completion, complete with a unique code. You can use that code to go online to get your license.

The only way to obtain a permit is from the website gooutdoorsflorida.com; you cannot get one at a bait and tackle store or Walmart. You have to renew it annually, as well.

Each of the four modules is an audio and visual presentation, with one interactive quiz question after each module.

The FWC introductory module explains why they decided that some shark-fishing training is required, including information regarding human safety factors, shark survival issues and preservation of the fishery. They also explain the reason for the permit and the training course is simple – they want to keep track of the numbers of people who are shore-based shark fishing.

The next module, Module 2, addresses the fact that anglers should be aware of each species they catch, and that different species are subject to different bag, size and gear limits. There are 27 species of sharks prohibited from harvest in Florida state waters, which goes out to three nautical miles off the Atlantic coast and nine nautical miles off the Gulf Coast. Some prohibited species often caught off Florida’s beaches include hammerhead, lemon, sandbar and tiger.

Module 2 also addresses the gear you can legally use. This includes hook and line only using non-offset, non-stainless steel circle hooks must be used with live or dead natural bait. You cannot use treble hooks, or any other multi-pointed hooks with live or dead natural bait. You should consider filing down the barbs for easier removal, and you must have in your possession a means to cut the hook or leader (bolt or cable cutters would work), or a dehooking device. Also, 80-pound test should be used for most sharks.

Chumming from the beach is now prohibited for any species, including sharks. Period. Chum is defined as any animal products – synthetic or natural – that are put in the water to attract, but not harvest, a marine organism.

Module 3 gives tips for best practices when fishing for sharks. In particular, it addresses the fact that it is not wise to shark fish near swimmers or in popular swimming areas during hours when swimmers are frequently present. It specifies that shark fishermen should “consider moving” if swimmers arrive, and that the best way to avoid swimmer/angler conflict is to fish for sharks in the summer and/or at night.

Anglers cleaning up after themselves has always been a hot-button issue, particularly concerning monofilament line and bait (this is a problem we addressed in our articles last year) and they touch on that in Module 3, as well as the fact anglers on the beach at night can only use amber or red lighting, due to sea turtle nesting season.

Module 4 is interesting, as it pertains to shark anatomy. For instance, did you know that almost all types of sharks with an interdorsal ridge are prohibited from harvest? This ridge is a visible line of raised skin between the first and second dorsal fins (the fins on top of a shark). These sharks are called “ridgeback sharks.”

Fin placement, tail ship and the inter-dorsal ridge are key elements in identifying the shark you have on your line. This brings up a very important point the FWC stresses throughout the modules: “If you don’t know, let it go.”

The 10-question quiz felt a little bit like the driver’s license exam: I went into it feeling like I knew the information inside and out, but there were two questions in particular that were worded just vaguely enough to keep me guessing about my answer. I did pass, though.

The entire process that began with a random decision to become certified as a shore-based “Shark Smart” angler and ended with me printing out my certificate took less than 20 minutes.

If you’re going all the way with it to get your permit, you go to gooutdoorsflorida.com, create a customer account (if you haven’t already) and go to “view all license options.” When you see options under “license catalog” click whether you’re a resident, what your age is, and “saltwater fishing.” Scroll down the page that comes up until you see “combinations.” Shore-based shark fishing will be one of the options, and the license is free. Just put it in your cart, punch in your unique code from your certificate and you’re good to go.

If you have any questions about the new regulations, go to myfwc.com/fishing/saltwater/recreational/sharks.