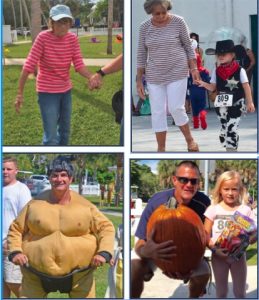 This past Saturday was the traditional Halloween Carnival, an event that island kids have treasured for almost 40 years. It was raining by the time the carnival began, but that didn’t stop the fun.The costume parade and contest usually held on the outdoor stage was held instead in the auditorium, and the carnival games were lined up in the corridors of the Boca Grande Community Center. The cake walk in the Houghton Room was a huge hit, with approximately 25 cakes donated.

It isn’t so much the fact that the games are superb (which, of course, they are) or the heated competition in the costume contest that makes this event so special, but it’s more about the people we come to be with and the very dear people who make it happen. Jungle Joe Weir, Coach DJ Keisling and Mr. David Bartels work so hard to make sure our kids have a great time, even when it’s too wet to inflate the inflatable bounce houses and there are puddles to jump over. What work it must have been to set everything up early that morning, only to have to take it down and reassemble it somewhere else when the rain started. While most people would have just called it off, not Jungle Joe.

“We put in all of this work, and there’s no way we could just cancel it,” he told the crowd.

There were two more reasons that this year was a little different than the others. Dee Wheeler, the founder of the Halloween Carnival, was not with us in physical form this time, but I know her spirit was around. Dee started the carnival almost 40 years ago because island kids have never had neighborhoods to trick-or-treat here. Her first and foremost priority throughout her life was this island’s children, and she loved every one of them throughout the years.

Nancy Lingeman is still with us but did not attend this year. She has been a staple of the Halloween Carnival for so long, but this year it was Pat Chapman handing out the ribbons instead of Nancy. She is one of the kindest women and has one of the sweetest souls I have ever known.

“We thought about her today, and we miss her, big time,” DJ said during his introduction to the costume contest.

As the mother of five children who have all grown up on the island, all I can say is, thank you from the bottom of my heart on behalf of all parents and kids who are blessed like me to be here.There is magic here – no one can contest that – and Joe, David, DJ, Dee, Nancy and everyone at Friends of the Boca Grande Community Center are part of the reason why that magic exists.