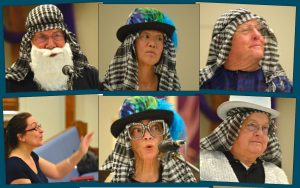 This April 2, 3 and 4, Grande Glee does something completely different when they sing their first full-length concert – “Joseph and the Amazing Technicolor Dreamcoat.” This 90-minute production originally was written as a concert with almost no spoken lines. So it’s perfect for a Grande Glee performance.

As you probably know, “Joseph and the Amazing Technicolor Dreamcoat” is the Biblical story of Joseph and his coat of many colors from the Book of Genesis. It was the first musical made by the team of Andrew Lloyd Webber and Tim Rice in the late 1960s, when rock musicals began. In fact, Joseph predates “Jesus Christ, Superstar” and “Evita” in the Webber/Rice collaboration.

Over 50 years after its creation, “Joseph” has been performed more than 20,000 times all over the globe. In churches. In schools. In community theaters. In summer stock. On Broadway. Everywhere.

Yet, Boca Grande’s version of “Joseph” is truly different than any of the thousands of other productions. Sharon Ponte, Glee’s musical director, divided the show so that every singer has the chance to sing a big solo. Giving everyone the opportunity to star is part of the Grande Glee’s mission.

Here’s how it works.

“Any Dream Will Do” is the upbeat opening song, starring the fabulously talented Julia Pierce as the narrator of the story. She takes center stage wearing a colorful bowler with a huge purple plume. The ebullient Reyn Guyer joins her, singing the part of Joseph, while the rest of Glee harmonize as his brothers.

Then a very bearded John Cleghorn joins them on stage. He sings Jacob, Joseph’s ‘dad,’ in “Jacob and Sons/Joseph’s Coat.” Their wonderful, happy voices contrast with the angry singing of the jealous brothers. The brothers, by the way, are all the Glee members not singing a solo at any one time. The only exceptions are the “Ahhh Girls,” Joan Ardrey and Carol Elwood, who play angels leading the harmony woven throughout the score.

Next, Oakley Johnson assumes the role of Joseph, taking the coat from Reyn. Oakley’s dreamy vocal style is perfect to lead “Joseph’s Dreams.”

The music changes from melodic to country western for a hysterical version of “One More Angel In Heaven.” Everyone dons cowboy hats as Michael Alexander and John Cleghorn play two good ‘ole boys explaining to Jacob that his favorite son has died. Carol Elwood joins them as a glorious angel in Heaven.

Linda Rollyson is fabulous as the Narrator singing “Potiphar,” a lyrical ditty reminiscent of a Cole Porter tune. Jerry Edgerton is the frustrated husband who can’t keep his wife from sleeping with his slaves. Karen Snyder plays the cheating wife. And John Moenning takes over as Joseph, a man who “does not believe in free love!” Their acting is a wonderful complement to this terrific number.

“Close Every Door to Me” is the masterful lament John Moenning sings as Joseph. He’s stuck in prison with no hope of ever getting out.

Bringing a youthful exuberance to this show right before intermission, Wesley Locke jumps in as the cheerleading narrator. She cheers everyone through “Go, Go Joseph,” as John Thomas (Butler) and Julian Keevil (Baker) beg Joseph to tell them what their dreams mean. Watching the Grande Glee cheer with pom-poms is an uproarious ending to the first act.

After intermission, Elaine Skypala takes over as the narrator in “Pharaoh Story.” Her bright, beautiful voice introduces us to Pharaoh, played by Boca Grande’s own Elvis, James Martin.

Then Margaret Bush takes the bowler from Elaine and becomes the narrator singing “Poor, Poor Pharaoh/Song of the King” in a surprisingly high, clear soprano. New Glee member Tom Wilson plays the lively lad brave enough to tell Pharaoh of a prisoner who can read dreams, while everyone rocks to Pharoah’s fabulous doo-wop sound.

All three continue rocking in “Stone the Crows” when Pharaoh makes Joseph his go-to guy in Egypt’s government.

Although this would be a great ending for the show, Webber and Rice decided to bring back the guilty brothers. John Thomas and Julian Keevil are over the top channeling Maurice Chevalier as the brothers remember “Those Canaan Days.”

Erica Ress-Martin finds it hard not to cha-cha as she takes over the narrator role in “The Brothers Come to Egypt.” Tom Wilson and Jerry Edgerton play brothers sent to Egypt to find food. They don’t recognize Joseph, played by Oakley Johnson. The rest of the brothers are groveling as they sing harmony.

Joseph (Oakley) decides to test his family and plants a cup in Benjamin’s sack. Carol Elwood and Karen Snyder sparkle as the narrators in “Who’s The Thief?” Carol sings high and Karen sings low.

Elaine Skypala and Erica Ress-Martin take over defending Benjamin’s honor. Wearing fruit on their heads, they sing “Benjamin Calypso,” offering to go to prison in place of Benjamin.

From rock ‘n roll to lyrical to country western to cheerleading to ballads to doo-wop to calypso to cha-cha and back, the Grande Glee concert is an incredible evening of joy. Produced by Spark Boca Grande, “Joseph and the Amazing Technicolor Dreamcoat” is a fundraiser for the La Vega Christian School, with all net profits going to the Dominican Republic mission.

Tickets are available at bocagrandetickets.com. Or come to the beautiful Lighthouse United Methodist Church on Gilchrist Avenue and 3rd Street, and hopefully there will be a few tickets available at the door. It’s April 2 to 4 at 7 p.m.