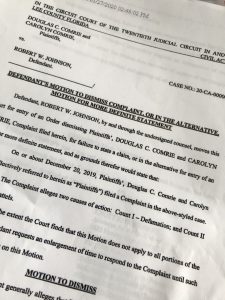 BY MARCY SHORTUSE – The case of the 3rd Street rocks continues, as council for local historian Robert Johnson has filed a motion to dismiss the complaint, or motion for more definite statement with the circuit court of the 20th Judicial Circuit Court in Lee County.

According to the document, which was filed on January 27, Johnson’s attorney is also moving for entry of an order of dismissal against plaintiffs Doug and Carolyn Comrie. They are the owners of the residence on 3rd Street next to where the couple placed a configuration of boulders that block a walkway along the sea wall that has been called “The Promenade” since the late 1800s. The strip of land between 1st Street and 4th Street along the sea wall was deeded to the community in 1927, but a select few residents now claim that deal is defunct … just like the corporations that struck the deal.

A suit was filed last month against Johnson as the Comries are alleging he spraypainted their boulders orange, and “defamed” them in a letter to this newspaper, and in statements made to the Boca Grande Historical Society. They are seeking monetary compensation.

The nine-page countermotion filed a few days ago describes each statement made by Johnson that the Comries are alleging were defamatory, and says the statements do not fall into the court’s description as such, and that Johnson was exercising his right to free speech about a public issue.

“The complainant generally alleges that Defendant Robert W. Johnson made defaming statements about the plaintiffs placing the stones on their property to an editor (Marcy Shortuse) at the Boca Beacon, which is a newspaper in general circulation.”

In addition to the comments made to the Boca Beacon, the document describes that Johnson “made public comments as an historian of the Boca Grande Historical Society and History Center, claiming the Comries were blocking county-owned property which he knew was false.”

The countermotion describes the court definition of “defamatory” and states, “the words or implication must charge a person with an infamous crime or tend to subject him to hatred, distrust, ridicule, contempt or disgrace …”

Under the subhead of “Motion for more Definite Statement,” the document states that the property description given by the plaintiffs does not include a survey or map to back up their defined property lines, and that the Comries need to remedy the “vague and ambiguous assertions contained in the complaint so that the defendant can be put on notice of the ultimate facts alleged.”

Johnson is also named in this suit as an alleged trespasser, as the Comrie’s have stated they have evidence that he spray painted the rocks orange.