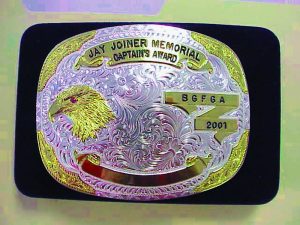 ■ BY MARCY SHORTUSE – The captain who wins the prestigious Jay Joiner Memorial Belt Buckle this year will have a much bigger claim to fame, as the format for competition has now changed.

According to Cappy Joiner, the president of the Boca Grande Fishing Guides Association and the late Jay Joiner’s uncle, the winning captain will be the captain with the most tarpon released during four tournaments this season – World’s Richest Tarpon Tournament, Ladies Day Tarpon Tournament, the Red Gill Tournament and Howl at the Moon Ladies’ Night Out.

“We felt that over the years we have lost some of the significance of how important this award is,” Cappy said. “So we decided to change the format to four tournaments, and the captain who catches the most tarpon in those four tournaments will win the Buckle. We will tally most overall releases out of the four tournaments.”

The Belt Buckle, as well as a $1,000 cash prize, will be presented at a party at Hills Country Club in Rotonda on July 7. All Boca Grande Fishing Guides Association members, and winning captains who are eligible to win the Buckle will be invited. There will be live music, and hors d’oeuvres will be served.

Capt. Jay Joiner was one of the most prolific captains in Boca Grande Pass prior to his death when he was just 25 years old. He died in October of 1992 after becoming the first captain to win the World’s Richest two years in a row.