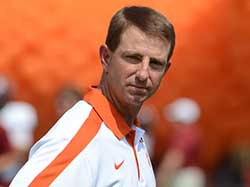 BY MARCY SHORTUSE – Two of Boca Grande’s finest will be down on the football field this Monday at the University of Phoenix Stadium in Glendale, Arizona for a game that millions of eyes will be watching. It’s the Clemson Tigers vs. the Alabama Crimson Tide in the College Football Playoff National Championship, Swinney vs. Saban, north vs. south.

Why that last one, you might ask? It’s because, while Coach Dabo Swinney’s island home is on the south end of our island, Coach Nick Saban’s home is on the north end.

When they meet in the middle, it’s often at Hudson’s Grocery. Shop owners Howard and Emily Wise are big fans of both coaches, and close friends.

Dabo has a special place in his heart for his Boca Grande home and will cheerfully defend his territory to all comers.

“He is on the north side and I am on the south side, so I guess this is ‘North against the South’ for the championship,” Swinney said.

Theresa Lasher, who also works at Hudson’s, said while both are great and kind men, Dabo is her personal favorite.

“That’s MY Dabo,” she said teasingly.

Islander Nat Italiano speaks with Saban and his wife, Terry, often when they’re on the island, and he is good friends with Dabo and his wife, Kathleen, as well.

“I know Dabo and Kathleen very well. We tailgate together, and I love Nick and Terry as well,” Nat said. “It’s very exciting to have both coaches who are in the championship on the island. It’s a wonderful coincidence.”

The two coaches are actually friendly, make no mistake, though on Monday tensions might be a little higher than usual.

Saban, who has been with his team for nine seasons and has three national championships and four SEC championships under his belt, said he is actually thrilled to be competing against Clemson.

“This football team at the University of Alabama has worked hard and stayed focused from the very first day of Spring ball practice,” Saban said. “They have overcome tremendous adversity during the season to earn a coveted spot in the National Championship game against a very talented and well-coached Clemson team. My respect and friendship with Dabo and Kathleen make it all the more special. Being Boca Grande neighbors, Terry and I have enjoyed Dabo and his team’s success this season, and we know what a great challenge it will be on January 11th for our Alabama team. Whatever the outcome, one thing for certain is that both families will be relaxing and enjoying Boca Grande after February Signing Day. Then it will all be about who can catch the biggest fish!”

Swinney is in his eighth season coaching Clemson, with two ACC championships and a bowl record of 5-3 under his belt. He is already picking what he’s going to get to eat at one island restaurant when his team wins.

“I guess the loser will have to pay for dinner at The Temp,” he said in jest (or not?).

After Monday’s game, you can be assured that both coaches will be looking forward to a little downtime, whether it’s in Boca Grande or not. Dabo made it sound like it very well might be spent here, and some of it might be spent with Nick.

“I have played golf with Nick, gone fishing, had dinner,” Dabo said. “It has been great. Boca is a great place to come and relax. I have come there to vacation since 1994 and had a place since 2010. I certainly enjoy getting together with Nick when I am there.”