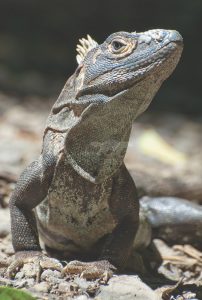 BY MARCY SHORTUSE – While we have been dealing with an iguana eradication program for many, many years, at Tuesday’s meeting it became apparent that either people haven’t been reading about the situation or just recently moved here. Because of this, and at the iguana panel’s request, we will attempt to break down the pertinent information here.

Green iguanas, by the way, are found only occasionally on Gasparilla Island. They almost always live much farther south of us, as they cannot handle cold and they don’t burrow. There have been times on Sanibel Island when it was “raining iguanas” after a particularly harsh cold snap. Our iguanas snuggle up in their burrows and wait it out.

These lizards have been around, like the opossum and the alligator, since prehistoric times. They have learned to adapt and survive using every means necessary, including dramatically altering their diets and appearance. They are smart and built to survive. While you might get an iguana in a trap one time, you can be sure the other iguanas on your property will learn from the behavior a trapped iguana presents. No amount of attractive bait will entice them to enter a trap a second time.

Snares set by private individuals must be ground snares, not hanging snares, to ensure the safety of other animals that might be caught (i.e., pets). Snares work well with iguanas, because they hold their heads up as they move about in order to watch for predators.

Instead of planting these, try an iguana-resistant plant such as milkweed, oleander, citrus, crotons and many other toxic, tough, thick-leaved plants.

These iguanas have lasted for this long on the planet for a reason: Not many other species want to mess with them, and catching them is not as easy as you think.