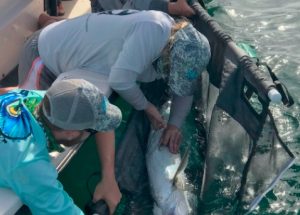 Ten years ago Bonefish & Tarpon Trust (BTT) started a tarpon-tagging project in Charlotte Harbor. Back then we used heavy and expensive satellite tags. But those clunky tags gave us precise daily locations of each tagged fish during their fall migration. We learned generally where the fish spent the winter and the routes they took to get there. We also established proof that at least some of the tagged fish returned to Charlotte Harbor in the spring.

This migration data provided foundational information to build a knowledge base, which helps to inform BTT’s efforts to conserve tarpon in Florida and beyond.

This past July, BTT again tagged tarpon in Charlotte Harbor, but now acoustic tags are used as part of BTT’s Tarpon Acoustic Tagging Project, sponsored by Maverick Boat Group. In collaboration with the University of Massachusetts Amherst, BTT tagged 14 tarpon in and around Boca Grande. The work was made possible by many local guides donating their time and knowledge to first land and then help tag these fish.

Each tag will transmit acoustic pings to strategically placed underwater receivers for 5 years. Each time a tagged fish swims within range of a receiver the date, time and tag number will be recorded. BTT also collaborates with other organizations that have placed receivers throughout the Gulf of Mexico and the entire Atlantic coast. Today there are approximately 5,000 receivers recording tarpon movements for BTT.

Now in the fourth year of tagging with acoustic transmitters, BTT scientists are already receiving two and three years of data for the same tagged fish. For example, a 50 pound tarpon tagged in Charlotte Harbor in the summer of 2016 has been tracked as migrating around the peninsula and up Florida’s east coast to Cape Canaveral that fall. It then followed the mullet run up to South Carolina and made its way back to Shark River in South Florida for the winter. By the next summer, it was back in Charlotte Harbor and surprisingly made the same long journey in 2017.

These 5-year tags allow scientists for the first time to study long-term movement patterns and the connectivity within the tarpon population and between state and regional boundaries. So far it’s common to have seen tarpon move to and from the same location each year, but not all tarpon are repeating the same movements each year.

The detailed tracking data will provide BTT and other state and non-profit organizations with the information to help design proper conservation plans. Also, we now have proof that “Florida’s fish are