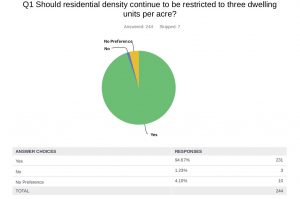 This will be the first part in a series regarding questions and misunderstandings about topics of discussion featured by the Boca Grande Community Planning Association.

STAFF REPORT – The digital survey of islanders completed last week shows strong support for the Gasparilla Island Conservation District Act and what it protects. Many of the survey respondents, after answering the survey questions, added comments expressing their support for the Act.  Many wrote about their concern that it was being eroded, expressing a hope that the island keeps its “old Florida” or “quiet” atmosphere.

“It’s gratifying to see such unanimity,” said Andy Krusen, Secretary of the Boca Grande Community Planning Association, “but some people seem to think that the Act gives us more protection than it actually does.”

“95 percent of respondents support keeping residential density at three dwellings per acre; but the Act only limits density to five dwellings, and the Lee County regulations setting the three dwelling limit are vague.”

The Boca Beacon reported last week on the legal problems with the current density rules.

Clarifying the regulations will not solve all the potential problems. Lee County has allowed projects to go ahead that violate the density rules, and those permissions have been challenged in a lawsuit, as the Boca Beacon has reported in past issues. The case is still pending in the Lee County courts under the name Gasparilla Island Conservation and Improvement Association v. Lee County, 19-CA-003515.

“We’re not involved in it, but we’re watching that case with great interest,” said Peter Solmssen, President of the Association. “How it is decided could affect what we suggest be included in the revised community plan.”

The Boca Grande Community Planning Association is still evaluating the survey results, and will report them to the Boca Beacon as they work through them, but one thing is clear.

“The responses are not ambiguous!” said Krusen.

Newer PostUpdate on Mercabo Cove … from the GICIA
Older PostThe time of the turtle is almost nigh, as false crawl found Wednesday