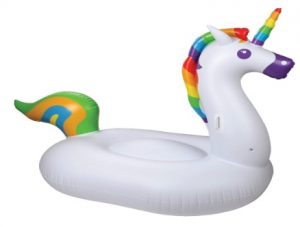 It isn’t every day that the Boca Grande Fire Department takes their jet ski out to rescue a wayward unicorn, but Sunday, Nov. 11 was that day.

At 2:22 p.m., island fire and EMS, as well as Lee County Sheriff’s Office deputies, responded to a call of a watercraft in distress/collision in Boca Grande Pass that turned out to be two children headed out to sea on a giant unicorn raft. Luckily the 12-year-old and 4-year-old were fine, as a nearby boater grabbed the unicorn’s reins before the unicorn and its passengers made it too far out into the Gulf.

Lesson to be learned: While unicorns are notoriously strong swimmers, they are no match for the current in Boca Grande Pass and the Gulf of Mexico. It’s best to keep them tied to the hitching post when you’re around swift-moving water.