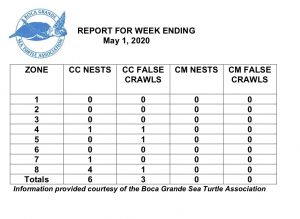 STAFF REPORT – Do you know your zone? For purposes of the Boca Grande Sea Turtle Association’s Turtle Patrol, the beach has been divided into eight zones, each one patrolled daily during the six-month nesting/hatching season. There are three zones in Charlotte County and five in Lee County, as follows:

Zone 3 -All of the Boca Grande Club 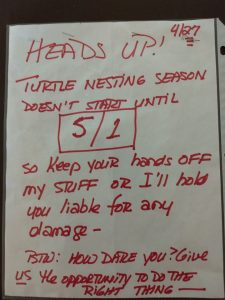 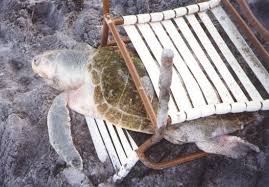 Just a reminder to our community that BGSTA is a volunteer organization. No one is paid. Volunteers wake up every morning at the crack of dawn, carry heavy equipment onto the beach, pick up trash, fill in holes, tag abandoned furniture left out overnight, and much more, in order to protect endangered/threatened sea turtles.

They do it for six months of the year. They do it because they believe in what they are doing. They truly care about the environment and want to see the species rebound. They are tagging beach furniture because it is a danger to sea turtles, not as a personal affront to anyone.

To the person who posted the sign below: You want the opportunity to do the right thing? Remove your furniture from the beach every night and please refrain from hostile and abusive behaviors toward volunteers.