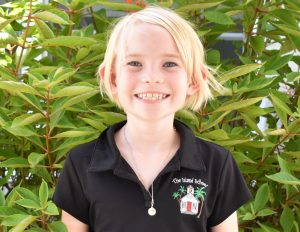 Makaila Lindsey, a 5th grade student at The Island School, will be performing in The Jungle Book at the Venice Theatre

But this is not her first time appearing on stage. She has participated in the Venice Theatre summer musicals for kids since she was in second grade.

“The first show was about a rooster,” Makaila said. “The farmer bought an alarm clock and the rooster was no longer needed. It was a lesson about how time changes the way we look at things.”

Last summer, she had a role in the “Law and Order” remake performance in Venice.

Makaila auditioned for the role of Luna the Monkey over the summer, and she’s been rehearsing for the performance since she was offered the role.

She said the dress rehearsal for the show that was held last weekend lasted for eight hours.

“But at least they fed us dinner,” she said.

There are four other kids in the play, as well as several adult roles.

Her character, Luna, “monkeys around a lot” and is quite mischievous and naughty.

“It’s a pretty fun role to play,” she said. “It’s a really beautiful set. I know all my lines, but I’m a little scared to be performing in front of 92 people.”

To combat being nervous, Makaila said she takes those feelings and makes an “emotional smoothie” to get rid of them.

“Once I drink the fear away, it just disappears,” she said.

A musically talented girl, she also plays the piano and the ukulele.

When asked what she likes most about acting, she said she loves watching the reactions of the people in the audience.

“Whether they are laughing or crying, I like to see their emotions.”

She’s also involved with the kids’ drama club at The Island School, and she plans on sticking with acting as she starts middle school next year.

“My goal is to be a Jedi trainer at Disney World,” she said. “That would be awesome.”

Makaila is planning to audition for “Matilda the Musical” this coming spring in Venice.

“Everyone who knows Makaila, knows she has great things in store for her,” said Makaila’s mom, Renee. “We are all excited and proud of this first giant step she is taking into launching her theatrical career, and looking forward to the wonderful actress she is becoming. It’s a lot for a young lady to juggle, and she is doing a great job keeping afloat. Some girls are born with glitter in their veins, and she leaves a sparkle wherever she goes.”

Based on stories by Rudyard Kipling adapted by Stuart Paterson and first published in 1894, the Jungle Book and the adventures of Mowgli and the exotic animals of the Indian forest remain timeless. Countless adaptations for film and stage prove that the themes of law, freedom, obedience and bravery never lose their power.

The shows take place at 7:30 p.m. and there are additional matinee performances at 2 p.m. on Saturday and Sunday.

Tickets can be purchased at venicetheatre.org/events. You can also call Venice Theatre at (941) 484-1115.

Newer Post‘Come get us, please!’ Local woman shares story of her Murphy Town family and their Dorian catastrophe
Older PostWe dodged a mess, but Bahamas are decimated