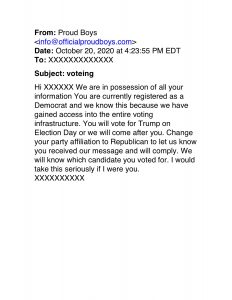 BY OLIVIA CAMERON AND MARCY SHORTUSE- An item in national headlines hit home recently, as an island resident reported receiving an email in regard to political affiliation, allegedly sent by the organization known as the “Proud Boys.”

The message, sent on October 20, cited personal information about the recipient, including the resident’s political affiliation and an address pertaining to the island. The message included statements of political persuasion, including the phrase, “We will know which candidate you voted for. I would take this seriously if I were you.”

Florida, the nation’s largest swing state, was among at least four states targeted, including Arizona, Pennsylvania and Alaska. Alachua, Collier, Brevard, Escambia and Citrus counties have reported a large amount of these emails to authorities. Authorities believe the emails were sent right at the time that early voting started for a reason.

Even before a news conference was held on the evening of Wednesday, Oct. 21 alluding to the fact that the emails appeared to have come from another country – specifically Russia or Iran – the resident considered it unlikely that the alleged Proud Boys message was sent by that organization.

“You think it’s targeted to you personally, but you can tell someone hijacked the account,” the resident said. “It’s scary because you don’t know for sure, but the punctuation is off.”

The resident has since reported the received message to the Charlotte County Board of Elections and the local sheriff’s office. Both agencies said they have received many calls of a similar nature.

“It sounds like multiple counties in Florida have been targeted,” said the resident. “The message itself is voter discrimination. I don’t think it actually came from the Proud Boys.”

The email has several misspelled words (such as “voteing”) and is rudimentary at best. The sender of the message claimed to have possession of the recipient’s information.

“My kids got worried and even told me to change all of my account passwords.”

The resident claims the message is just part of a political tactic to persuade recipients to vote for a particular candidate. No additional messages have been received by the person, but there are questions why certain counties across the state have been politically targeted.

Since the report, Forbes is one of the many sources to discuss the issue. From the alleged email’s threatening nature, the FBI is now investigating, according to a recent article published by Forbes reporter Nicholas Reimann.

The article further reads into the situation, highlighting its widespread attention it’s obtained by the media.

On October 21, Director of National Intelligence John Ratcliffe held a press conference where he stated that voter information had been obtained by Iran and Russia, separately, that could influence the U.S. election.

Journalist Katie Shepherd of The Washington Post collected information regarding a push back by Democrats in swing states who claim these alleged messages are an intimidation tactic meant to impact their votes.

Many sources have since discussed the topic, but the alleged emails have continued to be reported across Florida.

Name and address of recipient redacted in email at right.